Home > Back to Search Results > Battle of Queenston Heights...
Click image to enlarge 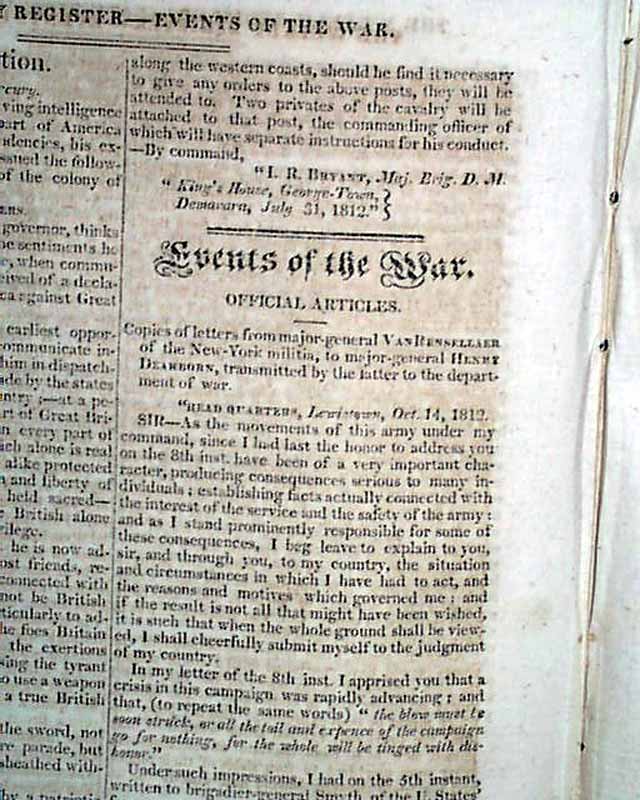 THE WEEKLY REGISTER, Baltimore, Oct. 31, 1812  There are several pages with reports headed: "Events of the War" with a major portion taken up with a lengthy letter: "...from major-general VanRensellaer...to major general Henry Dearborn..." datelined at Lewistown, Oct. 14, 1812. This is almost entirely concerned with the battle of Queenston Heights during which he led his 600 man force across the Niagara River, killing British General Isaac Brock in the process. But Rensselaer would be defeated by the 1000 man British force when the N.Y. militia refuses to come to his aid on grounds that their commission does not require them to proceed beyond the boundaries of the state. Queenston Heights is in Ontario. This is followed by yet another report headed: "The Battle of Queenstown" which takes over a full page. Only portions of these lengthy reports are shown in the photos.
Sixteen pages,  6 by 9 1/2 inches, in nice condition.