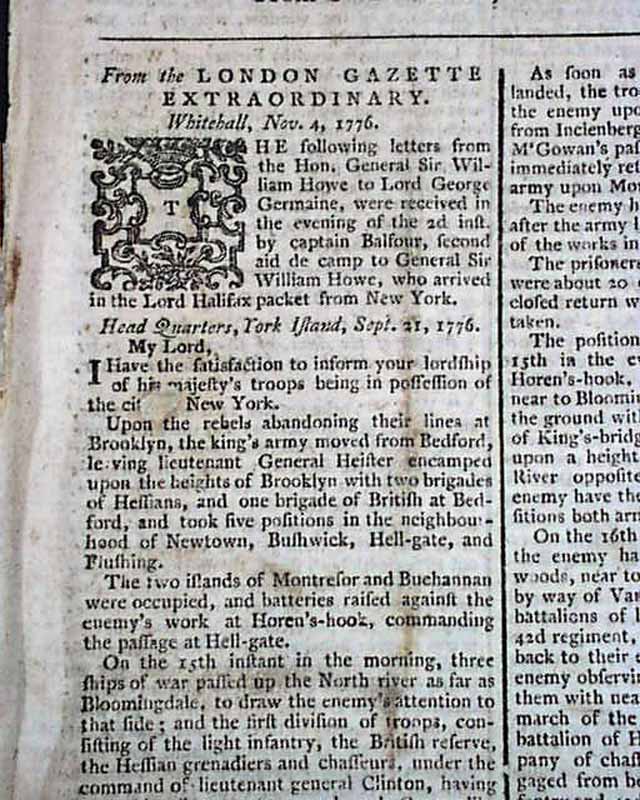 This is a very significant issue, as the entire front page is taken up with reports  on the historic capture of New York City by the British, beginning with the report from the noted: "London Gazette Extraordinary" issue of Nov. 4 which includes the lengthy & detailed report from General William Howe on his success in the capture of the city. His report is datelined "Head Quarters York Island, Sept. 21, 1776" and begins: "I have the satisfaction to inform your lordship of his majesty's troops being in possession of  the city of New York. Upon the rebels abandoning their lines at Brooklyn..." followed by much more on the details of the capture, taking over half of the front page, and signed in type: W. Howe.
This is followed--and also on the front page--by another letter signed by: W.  Howe from New York, dated 2 days later on Sept. 23, which begins; "Between the 20th and 21st instant at midnight a most horrid attempt was made by a number of wretches to burn the town of New  York in which they succeeded too well, having set it on fire in several places..." with more. This, then, is followed by yet another note signed by W. Howe concerning his successful & unopposed possession of Paulus Hook, followed then by the "Return of ordnances & stores taken in the city of New York...after the retreat of the Rebels, Sept. 15, 1776". There is then a letter from Vice Admiral Lord Viscount Howe from the ship Eagle in the New York River, Sept. 18 concerning the taking of New York City (see photos) which carries over to page 2.
As if this historic reporting was not sufficient for one newspaper, an inside page is taken up with the speech of Mr. Wilkes in the House of Commons which includes considerable discussion on the events in America. One paragraph includes: "An honourable gentleman near me attacks the American declaration of independency in a very peculiar manner, as a wretched composition, very ill written, drawn up with the view to captivate the people..." and so much more, more than the photos can show (see for portions).
The back have has a very significant "Declaration" signed in type by both: Howe and W. Howe in which the urge the residents of New York to return their allegiance to the King, rather those referred to at the beginning of the Declaration: "...the congress, whom the  misguided Americans suffer to direct their opposition to a re-establishment of the constitutional government of their provinces, have disavowed every purpose of reconciliation not consonant with their extravagant inadmissible claim of independency...".
An extremely significant issue, 8 pages, 8 1/2 by 11 1/4 inches, very nice condition.