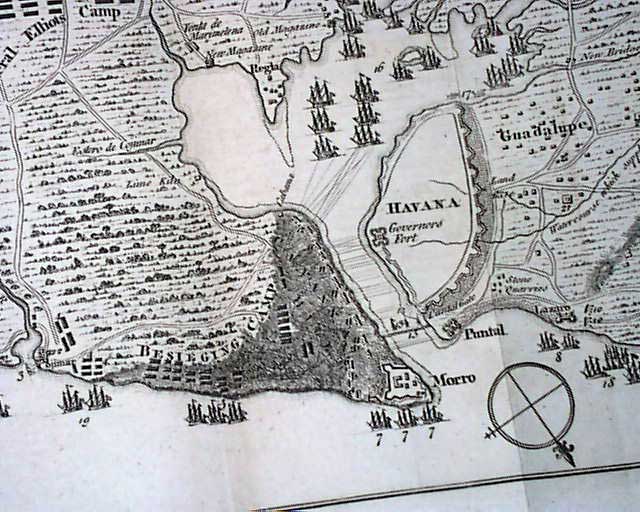 Item # 642789 GENTLEMAN'S MAGAZINE, London, October, 1762  The prime content would certainly be the account of the battle of Havana, Cuba, headed: "Account of the Taking of the Havannah" which is nearly a full page account. this is followed by the: "Articles of Capitulation agreed upon between Sir George Pocock...and the Earl of Albermarle, & the Marquis of Real Transporte...for the Surrender of the City & all its Dependencies with all the Spanish Ships in the Harbour" which carries over to take 3 pages.
This is then followed by the: "Account of Cannon, etc. Taken--Killed & Wounded". Plus there is even more, with: "Engineer's Journal of the Siege"  and "Ships Taken at the Havannah". There are ten pages in total covering the Battle of Havana.
Accompanying the lengthy content on the Battle of Havana is a nice foldout plate titled: "A Plan of the Siege of the Havana, Drawn by an Officer on the Spot 1762" which folds out to 8 by 10 inches.
Also in this issue are nearly 3 pages on: "Colonel Amherst's Account of re-taking Newfoundland" in Canada.
The noted map of Havana is the only plate called for in this issue.
Complete in 56 pages, 5 3/4 by 8 3/4 inches wityh wide, untrimmed margins, full title/contents page featuring an engraving of St. John's Gate. In very nice, clean condition.