Home > Back to Search Results > Map of Halifax, Nova Scotia... Much on electricity...
Click image to enlarge 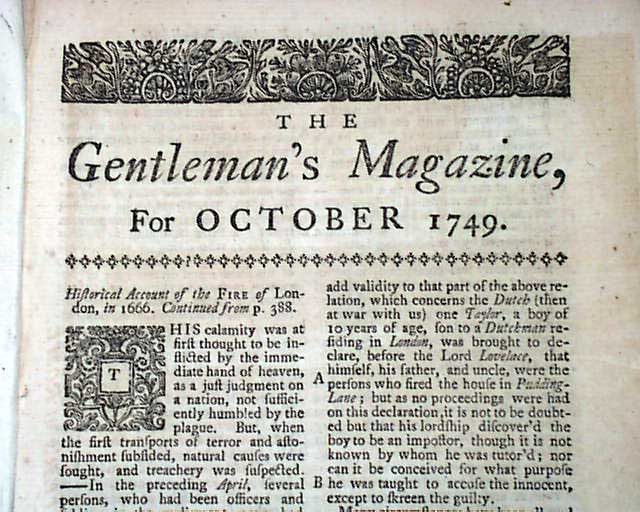 Map of Halifax, Nova Scotia... Much on electricity...

Item # 642738
THE GENTLEMAN'S MAGAZINE, London, October, 1749  One of the prime features of this issue is the map of Halifax found on one of the inside pages with the key to one side. The map is titled: "Plan of the New Town of Halifax in Nova Scotia".
Near the back is the "Historical Chronicle" which has news reports of the day, including an: "Extract of a Letter from Chebucto Harbour, Nova Scotia".
Among the other articles within are:  a continuation of an "Historical Account of the Fire of London in 1666" "New Remarks on Electricity"  "Electricity of Great Use in Medicine"  and more.
Two of the three plates called for are present, one being a fullpg. view of: "The Front View of Blenheim House", and another of the "Nave of St. Peter's at Rome".
Complete in 48 pages, 5 1/2 by 8 3/4 in. with wide, never-trimmed margins, full title/contents page with an engraving of St. John's Gate, very nice condition.