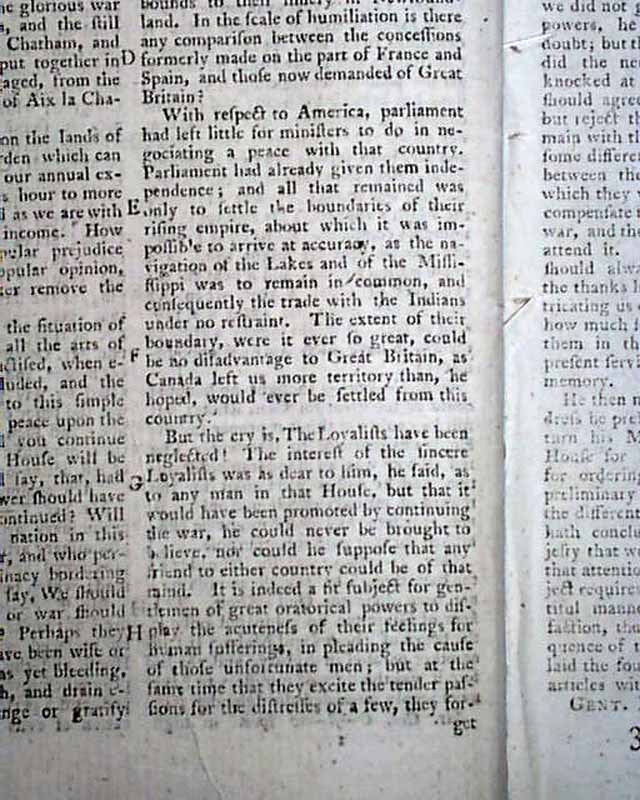 Item # 642355 GENTLEMAN'S MAGAZINE, London, April, 1783  Eighteen pages are taken up with "Summary of Proceedings in the 3rd Session of the Present Parliament" which include  discussion on concluding events with the war in America, including: "...With respect to America, parliament had left little for ministers to do in negociating a peace with that country..." and further on is more detailed discussion of the provisional treaty of peace for ending the Revolutionary War.
A full page plate of the Cathedral of Eveaux in Normandy is accompanied by a descriptive article. Another article: "The Story of a Young Jewess, lately Banished (from) the Imperial Dominions in Germany" & more.
Near the back is a letter from Earl Cornwallis to Henry Clinton concerning thoughts on the closing battles of the war in the Southern colonies (see). Also: "Advices From America" which takes nearly a full page with some war-related reports and other items (see). Another item notes in part: "...Sir Guy Carleton had just issued a proclamation inviting those American who had quitted their houses there to return & repossess them...at New York. That the British garrison were preparing to evacuate the place, and that the soldiers particularly Hessians, departed in great numbers."
The other 2 print called for, one a foldout, are present as well. Complete in 92 pages, 5 1/4 by 8 1/4 inches, nice condition.
A notable feature is the lack of the title page engraving of St. John's Gate, I believe the only issue post-1733 issue which lacks this plate.