Home > Back to Search Results > Repealing the Stamp Act...
Click image to enlarge 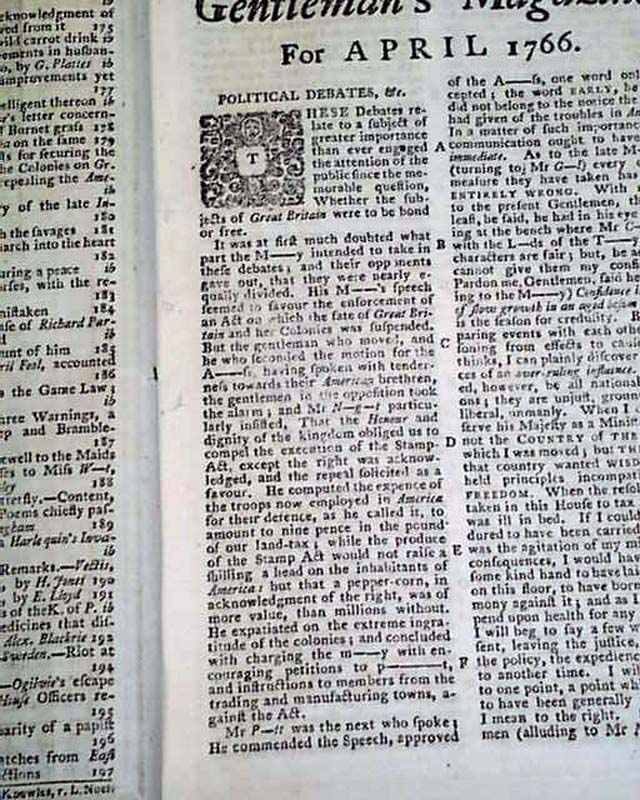 * Repealing the Stamp Act, in a London magazine

The first article in the issue is: "Debates on the American Stamp Act" which carries on for five pages of excellent reporting on this critical issue. The photos show only small portions, one bit reading: "...It is my opinion that this kingdom has no right to lay a tax upon the colonies...The Americans are the sons, not the bastards of England...There is an idea in some that the Colonies are virtually represented in this House. I would fain know by whom an American is represented here?...".
Also: "Abstract of the late Act of Parliament for the better Securing the Dependence of his Majesty's Dominions in America on the Crown of Great Britain", and this is followed by the brief yet very historic item headed: "Abstract of an Act for Repealing the Stamp Act" which includes: "This Act sets forth...might be productive of consequences greatly detrimental to the commercial interests of these kingdoms, it is therefore, from & after the 1st day of May, 1766, with the several matters & things contained in it, hereby repealed and made void to all intents and purposes whatsoever."  This is followed by over three pages on: "An Account of the Indian War".
Other articles include: "A Journey from Lancashire into Scotland" Some Farther Account of Irish Pilgrimages" "Recipe to Make Wild Carrot Ale" and more.
Near the back is the "Historical Chronicle" which has a brief item concerning Corsica with: "An attempt has been actually made to assassinate that brave champion for liberty Gen. Paoli, but the assassin...was discovered and cut in pieces."
The only plate called for is present, being a nice foldout map of various roads in England, measuring 8 by 11 1/2 inches (see).
Complete in 48 pages, 5 1/4 by 8 1/2 inches with full title/contents page featuring an engraving of St. John's Gate, great condition.

A nice issue of this very famous & successful British magazine from this significant year of the Stamp Act, and nine years before the outbreak of the Revolutionary War.