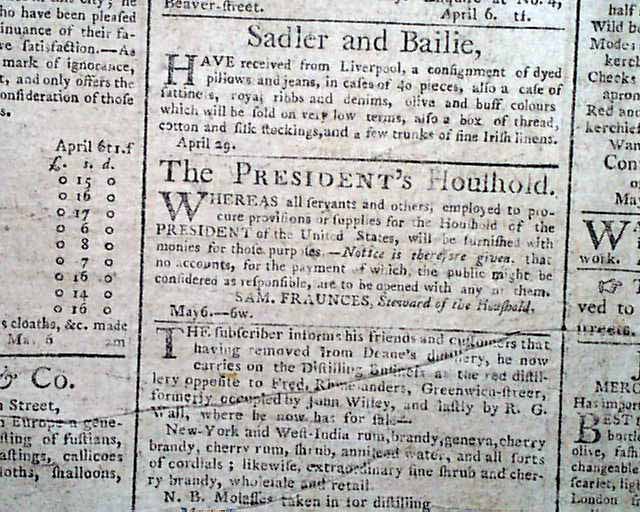 
THE DAILY ADVERTISER, New York, May 30, 1789  Being from the nation's capital at the time, and from the very beginning of the new federal government (Washington was inaugurated April 30) it is not surprising this newspaper would have an ad on page 3 headed: "The President's Household" reading: "Whereas all servants and others, employed to procure provisions or supplies for the Household of the PRESIDENT of the United States, will be furnished with monies for those purposes. Notice is therefore given that no accounts for the payment of which the public might be considered as responsible, are to be opened with any of them. Sam. Fraunces, Steward of the Household." (see).
Samuel Fraunces was the owner of the famed Fraunces Tavern in New York City, where George Washington said farewell to his officers at the end of the Revolutionary War (see hyperlink for more).
Four pages, bit close-trimmed at the bottom of the ftpg. only barely shaves some words in ads, nice condition.