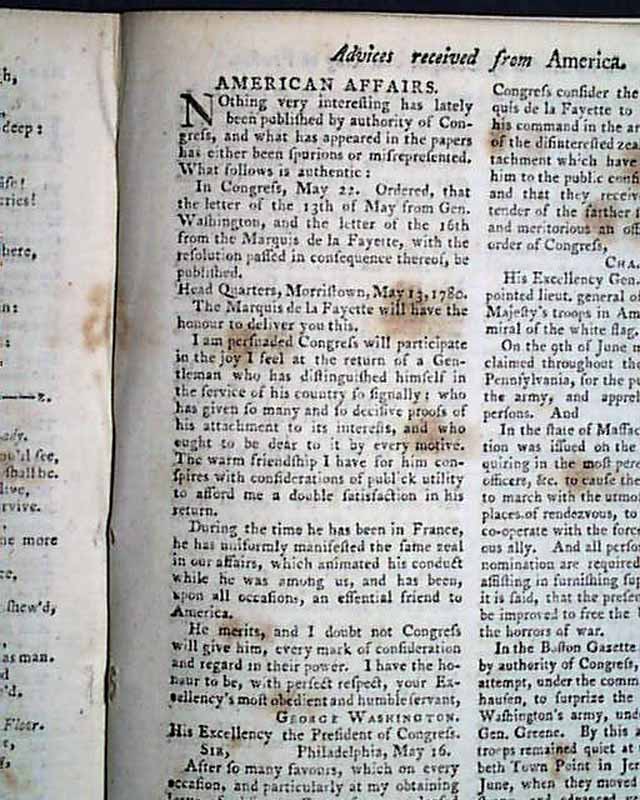 Item # 639935 THE GENTLEMAN'S MAGAZINE London, September, 1780 Near the back is "Advices Received from America" which includes a letter signed in type by: George Washington, datelined at Morristown, with much praise for  the Marquis de LaFayette, followed by a letter of thanks signed in type: La Fayette. Another report begins: "His Excellency Gen. Washington is appointed lieut. general of his Most Christian Majesty's troops in America, and vice-admiral of the white flag." (French troops). Also: "On the 9th of June martial law was proclaimed throughout the whole province of Pennsylvania for the purpose of supplying the army & apprehending suspicious persons."
And further on is a nice report of the Battle of Springfield, including: "...an unsuccessful attempt...to surprize the advanced posts of Washington's army under the command of Gen. Greene. By this account the British troops remained quiet at their post of Elizabeth Town Point in Jersey...moved out in force 7000 strong & advanced very rapidly towards Springfield meeting very little opposition till they came to the bridge, which was defended by 170 continental troops for 15 minutes against 1500 British...they retired with the loss...The enemy...after gaining the pass, marched into the town & in their usual way set fire to every house except four, they then retired in great haste...The Americans boast of this miscarriage as if they had obtained a victory..." with more.
Includes the foldout plate "The Cathedral or Cluniac Priory with the Freeschool at Thetford".
Complete in 52 pages, 5 1/4 by 8 1/4 inches with a full title/contents page featuring an engraving of St. John's Gate, scattered foxing, otherwise in very good condition.