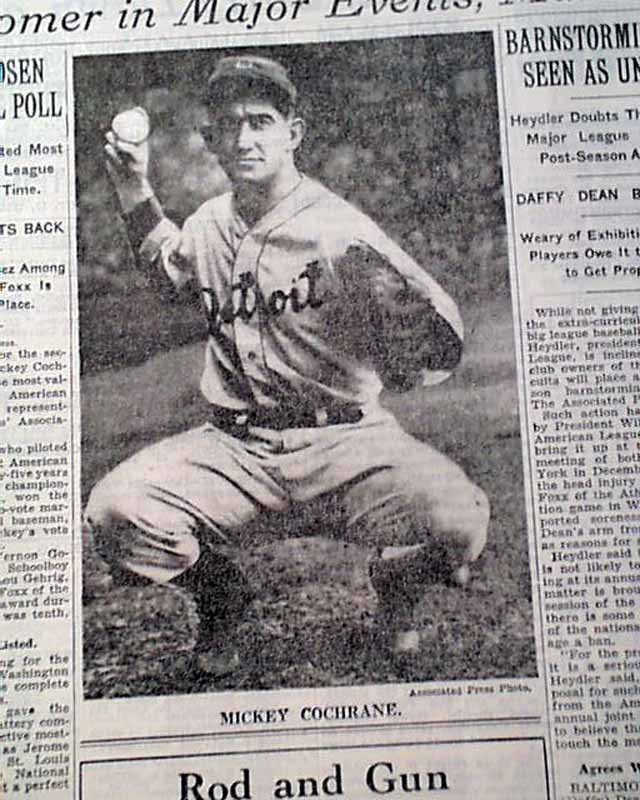 The sport's section (page 31) has a one column heading: "COCHRANE CHOSEN IN BASEBALL POLL" with subheads and photo. (see) First report coverage on Detroit Tiger's catcher, Mickey Cochrane, winning the most valuable player award for the 1934 baseball season.
Other news, sorts and advertisements of the day. Complete in 46 pages, this is the rare rag edition that was produced on very high quality newsprint, with a high percentage of cotton & linen content, allowing the issues to remain very white & sturdy into the present. Given the subscription cost, libraries & institutions rather than individuals were the primary subscribers of these high-quality editions. Nice condition.

wikipedia notes: It was as a Tiger that he cemented his reputation as a team leader. His competitive nature drove the Tigers, who had been picked to finish in fourth or fifth place, to the 1934 American League championship, their first pennant in 25 years. Cochrane routinely platooned Gee Walker, a right-handed batter, to spell left fielder Goose Goslin and center fielder Jo-Jo White, who were both left-handed batters. Cochrane's leadership and strategic skills won him the 1934 Most Valuable Player Award, remarkable considering that Lou Gehrig had won the Triple Crown.