Home > Back to Search Results > General J. R. Jones... A look back on victories...
Click image to enlarge 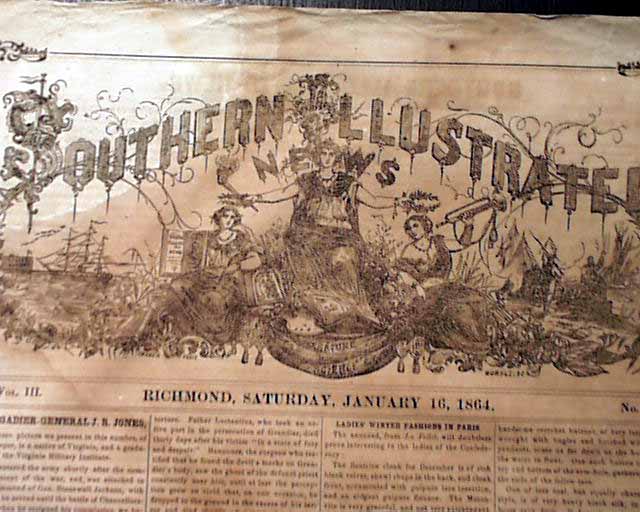 A rare publication from the Confederacy which seldom comes to the collector market. Although much of the content was literary in nature, there are news reports and a few illustrations.
The front page features a print of: "Brigadier-General J.R. Jones", with a very brief biography of him as well. Inside has over a full column editorial on the Civil War with much war-related news, including: "...We look back with pride...to the brilliant victories at Fredericksburg, the capture of Winchester, the magnificent though indecisive field of Gettysburg, the complete repulse of the enemy at Charleston...Texas has been preserved almost intact...General Kirby Smith has taken the field against the enemy in Arkansas..." with much more.
Begun on September 13, 1862 the "Southern Illustrated News" sought to fill the void left when the Southern States lost access to Harper’s Weekly and other illustrated newspapers from the North. In its “Salutatory,” in the first issue the editors state:  "...We propose to issue an Illustrated Family Newspaper…devoted to literature, to public instruction and amusement, to general news, and to the cause of our country in this trying hour when she is engaged in a terrible, but resolute and hopeful struggle for her liberty and independence..." Although it could be argued it never lived up to all of these goals as reports from the war were very limited, it was an important publication nonetheless. At its peak boasting as many subscribers as the largest daily paper in Richmond. As with all Southern publications it suffered from lack of supplies, reporters, artists and engravers as many had been drafted either into the military or into the service of the Confederate administration to engrave paper money and stamps. The engravings were crude when compared to Yankee publications.
Eight pages, foxing with some light damp stain, never bound nor trimmed with wide margins