Home > Back to Search Results > Mairan's Account of China... Repeal of the Stamp Act, in a London magazine...
Click image to enlarge 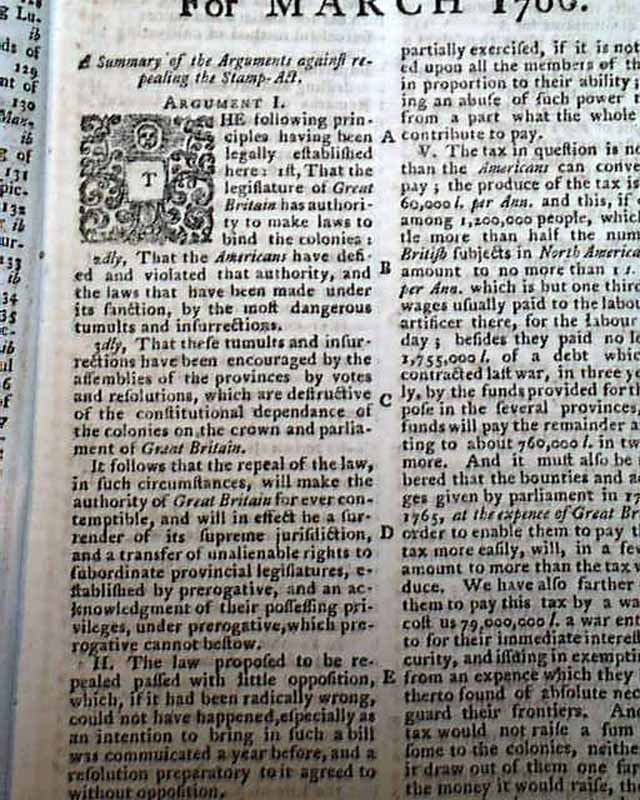 Repeal of the Stamp Act, in a London magazine...

* Repealing the Stamp Act, in a London magazine

The first article in the issue is: "A Summary of the Arguments Against Repealing the Stamp Act", which was such a divisive issue both in England and the American colonies. This article takes 2 1/2 pages and contains some interesting read (see for portions).
As an interesting response to the above, by far the most significant content in this issue is found near the back in the "Historical Chronicle" which gives nearly day-by-day account of various news. Under the dateline of: "Wednesday 19" is the historic report of the King signing the bill which repealed the hated Stamp Act, reading: "His Majesty went to the H. of Peers and passed the bill for repealing the American stamp act, that for securing the dependency of the colonies on the British crown, the land tax bill; the mutiny bill..." and more, and further on including: "...On this occasion the American merchants made a most numerous appearance, to express their gratitude and joy; ships in the river displayed their colours; houses at night were illuminated all over the city; and every decent & orderly method was observed to demonstrate the just sense they entertained of his majesty's goodness and the wisdom of parliament in conciliating the minds of the people on this critical occasion--An express was dispatched immediately to Falmouth, with letters to the different provinces to acquaint them with the news of the repeal." (see)
Other articles within this issue include: "Temper and Genius of the Indians", which is concerning the American Indians, which takes nearly 3 pages. There is a full page chart of: "An Analysis of Ray's Method of Botany" "Enquiry how far the World has Been Better'd by Christianity" "Remarks on Voltaire's Dictionaire Philosophique" "Some Account of the Isle of Ely" "Account of Dr. Haselquist's Travels in Egypt" "Observations on Mairan's Account of China"  "An Account of an Insurrection in Jamaica" and more.
This issue still contains the two full page plates called for.
Complete as a 46 page issue, 5 by 8 inches with full title/contents page featuring an engraving of St. John's Gate. Tiny binding holes at the blank spine margin cause no loss, otherwise in very nice condition.