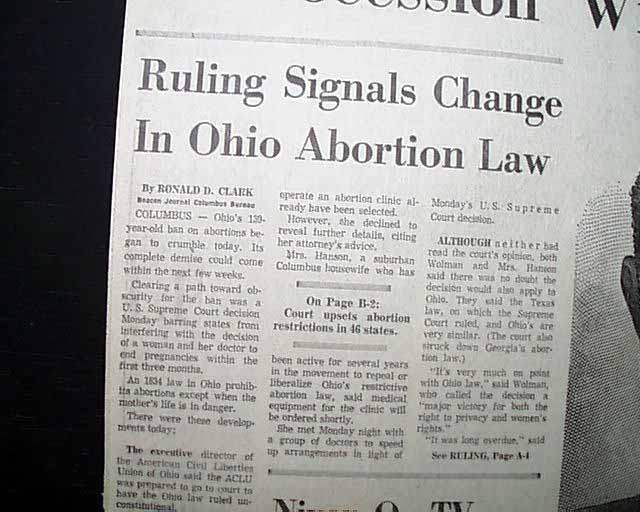 
AKRON BEACON JOURNAL, Akron, Ohio, January 23, 1973 (front leaf only)  The front page has the Supreme Court's landmark decision on Roe v. Wade. While some of the coverage was continued onto inside pages which are not present, finding issues with the Roe v. Wade decision are quite rare. The 3 column, 3-line heading states: "Ruling Signals Change In Ohio Abortion Law", which includes a subhead: "Court upsets abortion restriction in 46 states". Included in lie with the text is a small photo of Harry A. Blackmun, the writer of the decision. This displayable front page also has the two-line full-banner heading: "LBJ's Body To Lie In State In Capitol; Procession Will Be Wednesday", with considerable coverage of the death of ex-President Lyndon B. Johnson. A large photo of LBJ is also present.
Only the front leaf is present, but is in very good condition; would look good framed.