Home > Back to Search Results > An Act determining who will teach at universities......
Click image to enlarge 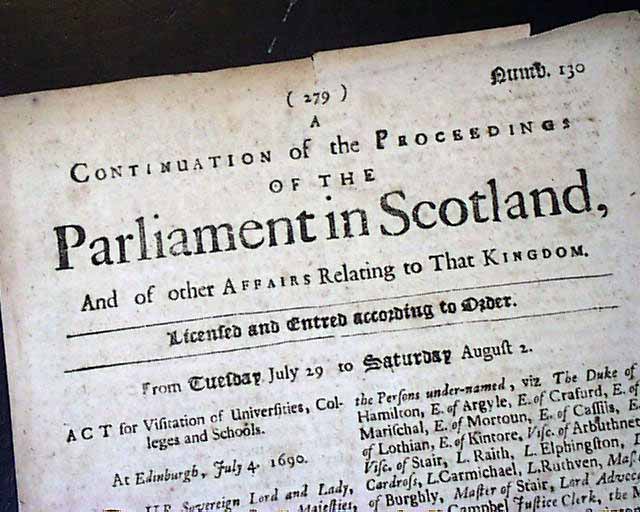 An Act determining who will teach at universities......


A CONTINUATION OF THE PROCEEDINGS OF THE PARLIAMENT IN SCOTLAND, London, England, August 2, 1690

A very rare title which lasted only from 1689 thru 1690. Crane & Kaye notes that only one American institution has any issues of this title. This issue is almost entirely taken with: "An Act for Visitation of Universities, Colleges and Schools" done at Edinburgh, July 4. This Act requires: "..from this time forth, no professors, principals, regents, masters, or others...be either admitted or allowed to continue in the exercise of their sad functions but such as do acknowledge and profess, and shall subscribe to the Confession of Faith ratified & approven by this present Parliament..." with more (see). The back page has some discussion of this.
A quite rare newspaper from England, with the title stating what the content is within. The year is found in the imprint at the bottom of the back page as well as the dateline of the lead article on the front page.
A single sheet issue, 6 3/4 by 11 inches, very nice condition.