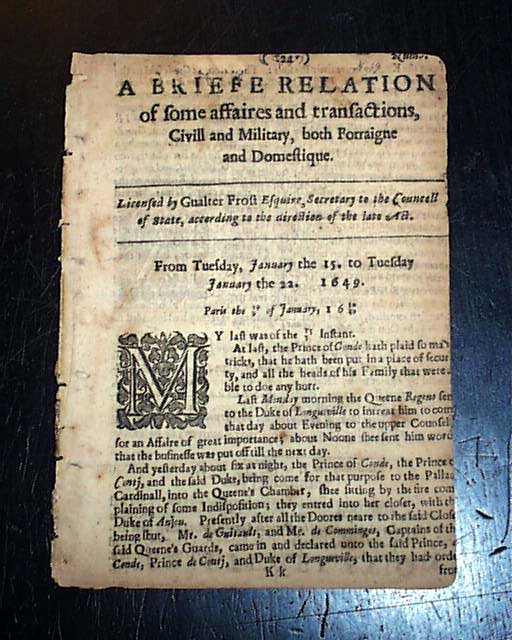 
A BRIEFE RELATION Of Some Affaires and Transactions, Civill and Military, both Forraigne and Domestique.  London, England, January 15-22, 1649   These early "newsbooks" as they were called, were the immediate predecessors of today's newspapers, being rather small in size (measures about 5 by 6 3/4 inches) and usually with anywhere from 4 to 24 pages. This is an 8 page issue. Although all newsbooks of the 17th century are rare, this is certainly among the less common titles we have encountered.
Crane & Kay (Census of Newspapers 1620-1800) notes that only one American institution has but one issue of this title, it being from 1650.
Published during the exciting English Civil War period in British history, this issue is filled with various military reports.
The issue is close-trimmed at the right margins clipping some letters but not causing loss of readability. Also close-trimmed at the bottom of the last leaf affecting text & the imprint, plus some minor loss at the top margin of the front page.