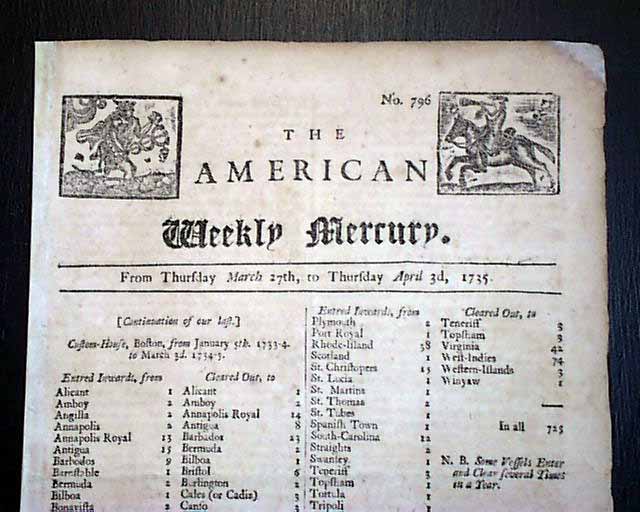 
THE AMERICAN WEEKLY MERCURY, Philadelphia, April 3, 1735   As any serious collector of newspapers knows, it is exceedingly difficult to find any colonial American newspapers from before 1760, let alone an issue from 1735. It began in 1719 and only published through 1749. It was the very first newspaper in all of the Middle Colonies, and only the fourth newspaper published in all of the American colonies.
This is a great issue from the premier city of the colonies at that time--when Ben Franklin was just beginning his career--and a handsome issue as well, as the masthead features two wood engravings, one showing a newsboy on horseback "trumpeting" the news.
Most of the front page is a continued list of ships which have arrived & departed from Boston. Also the beginning of: "His Majesty's most Gracious Speech to Both Houses of Parliament..." which carries over to page 2. Pages 2 & 3 are taken up with storm reports with datelines from various cities in England. The back page has a report datelined from New York, reporting that in Antigua: "...that island had been sickly or which some died; but now it was pretty healthful...a brig from Jamaica...who says the forces in pursuit of the rebellious Negros have dislodged them from all their towns in the mountains..." and additional reports. The back page also includes several advertisements
The imprint appears at the bottom of the back page: "Philadelphia: Printed and Sold by Andrew Bradford, Post-Master...". The Bradford family published newspapers in various towns during the colonial period.
Four pages archivally rejoined at the spine, very nice condition.