Home > Back to Search Results > Washington hopes to end the war soon...
Click image to enlarge 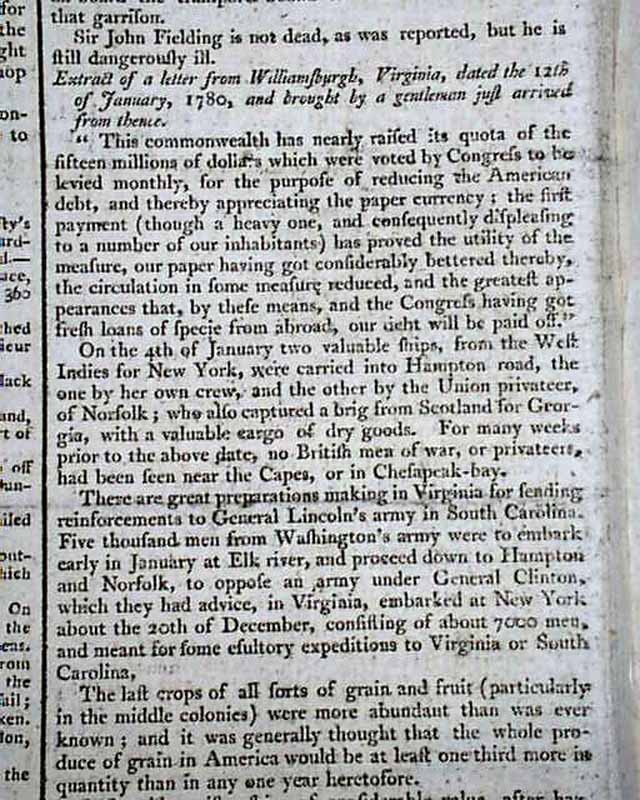 Page 2 has a letter from Williamsburg, Virginia, which has in part: "This commonwealth has nearly raised its quota of the fifteen millions of dollars which were voted by Congress to be levied monthly for the purpose of reducing the American debt..." and "...For many weeks prior...no British men of war or privateers had been seen near the Capes or in Chesapeak Bay. There are great preparations making in Virginia for sending reinforcements to General Lincoln's army in South Carolina. Five thousand men from Washington's army were to embark early in January at Elk river & proceed down to Hampton & Norfolk to oppose an army under General Clinton..." with more. Also: "...from  Boston...that preparations are making in the northern & middle states for rather more than a defensive campaign the ensuing summer; & that General Washington entertains the pleasing hope of closing the war in that country with some little glory to the American arms, before Michaelmas day next..." (see).
Four pages, folio size, partial red tax stamp on page 1, nice condition.