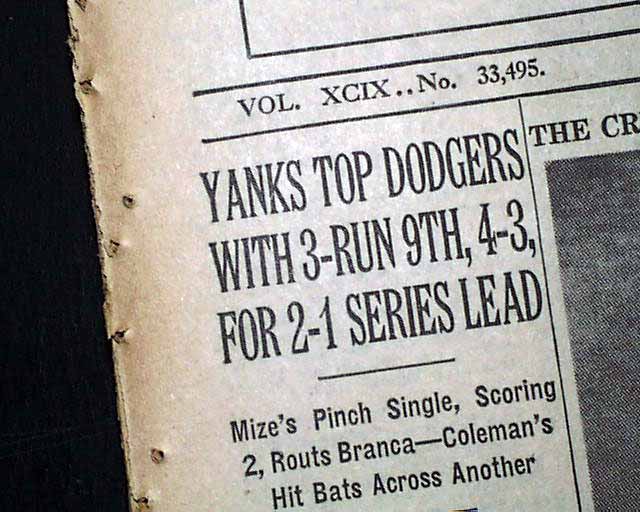 * 1947 World Series of baseball (game 3)
* New York Yankees vs. Brooklyn Dodgers
* 1st of 5 Championships in a row for Yanks

This 30 page newspaper has one column headlines on the front page that include: "YANKS TOP DODGERS WITH 3-RUN 9TH, 4-3, FOR 2-1 SERIES LEAD", "Mize's Pinch Single, Scoring 2, Routs Branca--Coleman's Hit Bats Across Another" and more with action photo of Johnny Mize.  Much more coverage on page 16 and 17 with headlines, photos and stats. See photos for some content. Great to have in this famous NYC title.

wikipedia notes: The 1949 World Series featured the New York Yankees and the Brooklyn Dodgers, with the Yankees winning in five games for their second defeat of the Dodgers in three years, and the twelfth championship in team history. This victory would start a record run of five consecutive World Series championships by the Yankees.

History was made in the ninth inning of Game 5, when the Ebbets Field lights were turned on, making it the first World Series game finished under artificial lights. The first scheduled Series night game would not be held until 1971.

Both teams finished the regular season with the exact same records and winning their respective leagues by exactly one game.