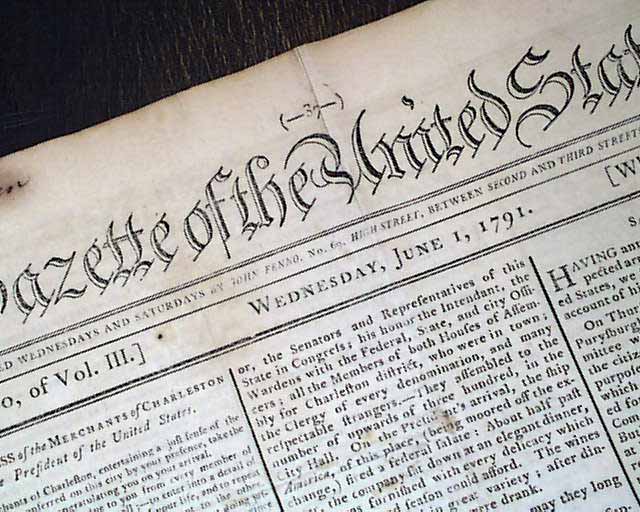 
GAZETTE OF THE UNITED STATES, Philadelphia, June 1, 1791  Most of the first column of the front page is taken up with two letters of the merchants & Masons of Charleston, South Carolina to the President, with his response to both, signed in type: George Washington, and G. Washington. The remainder of the front page is great & detailed report on the President's visit to Charleston, including mention that he attended divine service at the famed St. Philip's Church (Founded in 1680. The June, 1753 Gentleman's Magazine has a print of it.)
Page 3 has note from Worcester that: "...his Excellency the Vice President of the United States, his Lady & family, passed through this town on their way to his seat in Braintree." (see) Also a document from the "War Department" signed by H. Knox, Secretary of War, concerning pensions for injured Revolutionary War soldiers. Also two letters each signed in type by: Thomas Jefferson, Secretary of State (see).
The back page has an ad for "Manuel Noah, Broker...". Noah was Jewish and the father of the very prominent Mordecai Manuel Noah, referred to as the most influential Jew in the United States in the early 19th century. Four pages, tiny binding holes at the blank spine margin, very nice condition.