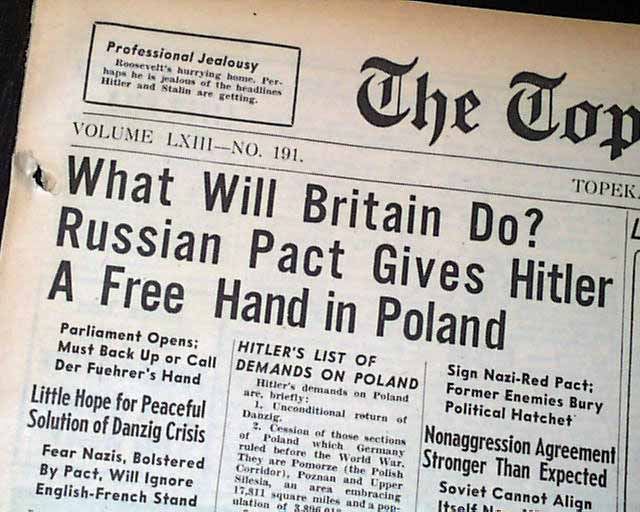 This 14 page newspaper has a three column headline on the front page: "What Will Britain Do ?; Russian Pact Gives Hitler A Free Hand in Poland" with subheads, related cartoon and text of the treaty. 1st report coverage of the Molotov-Ribbentrop Pact.

This paper has other news of the day with much on tensions building between the Nazis and Poland just a few days before the start of World War II.

This paper contains a few small binding holes along the spine, but it is otherwise in good condition.

wikipedia notes: The Molotov–Ribbentrop Pact, colloquially named after Soviet foreign minister Vyacheslav Molotov and German foreign minister Joachim von Ribbentrop, was an agreement officially entitled the Treaty of Non-aggression between Germany and the Union of Soviet Socialist Republics, signed in Moscow in the early hours of August 24, 1939, dated August 23, that renounced warfare between the two countries and pledged neutrality by either party if the other were attacked by a third party. Each signatory promised not to join any grouping of powers that was “directly or indirectly aimed at the other party”. The Pact is known by a number of different titles. These include the Nazi–Soviet Pact, Hitler–Stalin Pact, German–Soviet Non-aggression Pact and sometimes as the Nazi–Soviet Alliance[1]. It remained in effect until Nazi Germany invaded the Soviet Union on June 22, 1941 in Operation Barbarossa.

In addition to stipulations of non-aggression, the treaty included a secret protocol dividing the independent countries of Finland, Estonia, Latvia, Lithuania, Poland, and Romania into Nazi and Soviet spheres of influence, anticipating "territorial and political rearrangements" of these countries' territories. All were subsequently invaded, occupied, or forced to cede territory by Nazi Germany, the Soviet Union, or both. Only Finland was able to defend herself against the (Soviet) invasion and remained an independent Western democracy.

Many on the political left were outraged that the Soviet Union would make such a treaty with Nazi Germany, the revolutionary system which most threatened communism. Many Communists in Western parties repudiated this action and resigned their party membership in protest. Likewise, a number of Nazis were outraged by this treaty, and some party members went so far as to throw their party badges into the courtyard of the Brown House.