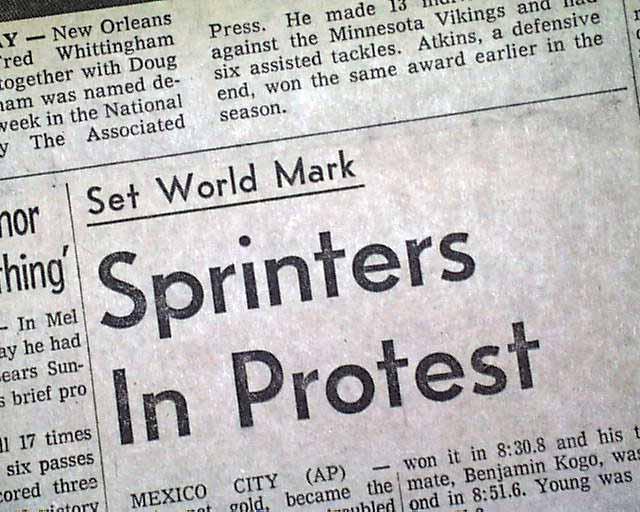 This 12 page newspaper has a two column headline on page 8:

Other news of the day. A few small binding holes along spine, otherwise good condition.

wikipedia notes: The 1968 Olympics Black Power salute was a notable black power protest and one of the most overtly political statements in the history of the modern Olympic Games. African American athletes Tommie Smith and John Carlos performed the Black power salute at the Olympic Stadium in Mexico City, regarded by most experts as historic.

On the morning of October 17, 1968, U.S. athlete Tommie Smith won the 200 meter race in a world-record time of 19.83 seconds, with Australia's Peter Norman second with a time of 20.07 seconds, and the U.S.'s John Carlos in third place with a time of 20.10 seconds. After the race was completed, the three went to collect their medals at the podium. The two U.S. athletes received their medals shoeless, but wearing black socks, to represent black poverty. Smith wore a black scarf around his neck to represent black pride, Carlos had his tracksuit top unzipped to show solidarity with all blue collar workers in the U.S. and wore a necklace of beads which he described "were for those individuals that were lynched, or killed and that no-one said a prayer for, that were hung and tarred. It was for those thrown off the side of the boats in the middle passage." All three athletes wore Olympic Project for Human Rights (OPHR) badges after Norman, a critic of Australia's White Australia Policy, expressed empathy with their ideals. Sociologist Harry Edwards, the founder of the OPHR, had urged black athletes to boycott the games; reportedly, the actions of Smith and Carlos on October 16, 1968 were inspired by Edwards' arguments.

Both U.S. athletes intended on bringing black gloves to the event, but Carlos forgot his, leaving them in the Olympic Village. It was the Australian, Peter Norman, who suggested Carlos wear Smith's left-handed glove, this being the reason behind him raising his left hand, as opposed to his right, differing from the traditional Black Power salute. When "The Star-Spangled Banner" played, Smith and Carlos delivered the salute with heads bowed, a gesture which became front page news around the world. As they left the podium they were booed by the crowd. Smith later said "If I win, I am American, not a black American. But if I did something bad, then they would say I am a Negro. We are black and we are proud of being black. Black America will understand what we did tonight."