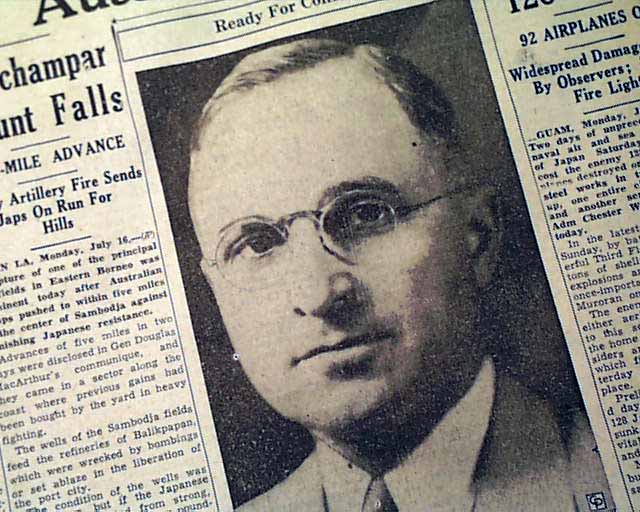 This 42 page newspaper has a two column headline on the front page: " 'Big Three' In Potsdam For Historic Meeting", with nice photo of Harry Truman with caption: "Ready For Conference". Other news of the day throughout with much on World War II. Good condition.

wikipedia notes: The Potsdam Conference was held at Cecilienhof, the home of Crown Prince Wilhelm Hohenzollern, in Potsdam, Germany, from July 16, 1945 to August 2. The participants were the Soviet Union, the United Kingdom, and the United States. The three nations were represented by Communist Party General Secretary Joseph Stalin, Prime Minister Winston Churchill[1] and later Clement Attlee[2], and President Harry S Truman. The French and the Polish were not invited to participate.

Stalin, Churchill, and Truman—as well as Attlee, who replaced Churchill as Prime Minister[3] after the Labour Party's victory over the Conservatives in the 1945 general election—had gathered to decide how to administer the defeated Nazi Germany, which had agreed to unconditional surrender nine weeks earlier, on May 8 (V-E Day). The goals of the conference also included the establishment of post-war order, peace treaties issues, and countering the effects of war.