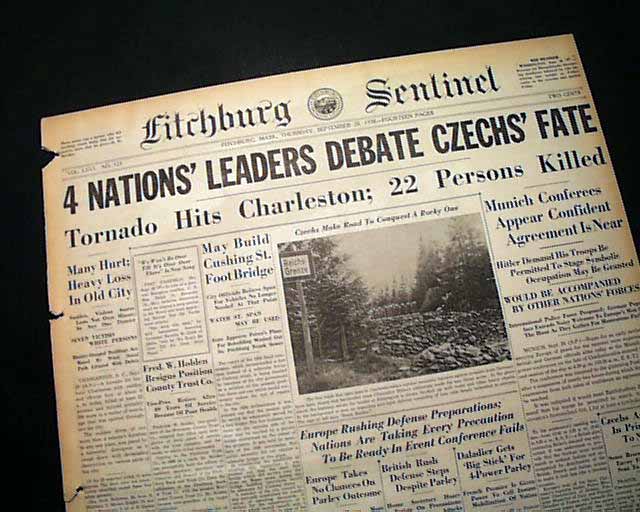 This tells of the Munich Agreement which allowed the occupation of the German Army in the Sudetenland. This historic report was published while the meeting was still in session.

Other news of the day. Light browning with some spine wear, otherwise in good condition.

wikipedia notes: A deal was reached on 29 September, and at about 1:30am on 30 September 1938, Adolf Hitler, Neville Chamberlain, Benito Mussolini and Édouard Daladier signed the Munich Agreement. The agreement was officially introduced by Mussolini although in fact the so-called Italian plan had been prepared in the German Foreign Office. It was nearly identical to the Godesberg proposal: the German army was to complete the occupation of the Sudetenland by 10 October, and an international commission would decide the future of other disputed areas.

Czechoslovakia was informed by Britain and France that it could either resist Germany alone or submit to the prescribed annexations. The Czechoslovak government, realizing the hopelessness of fighting Germany alone, reluctantly capitulated (30 September) and agreed to abide by the agreement. The settlement gave Germany the Sudetenland starting 10 October, and de facto control over the rest of Czechoslovakia as long as Hitler promised to go no further. On September 30 after some rest, Chamberlain went to Hitler and asked him to sign a peace treaty between the United Kingdom and Germany. After Hitler's interpreter translated it for him, he happily agreed.
The Führerbau, in which the Agreement was signed, is today a school, the Hochschule für Musik und Theater München

On 30 September, upon his return to Britain, Chamberlain delivered his famous "peace for our time" speech to delighted crowds in London.