Home > Back to Search Results > Amelia Earhart flight in 1937....
Click image to enlarge 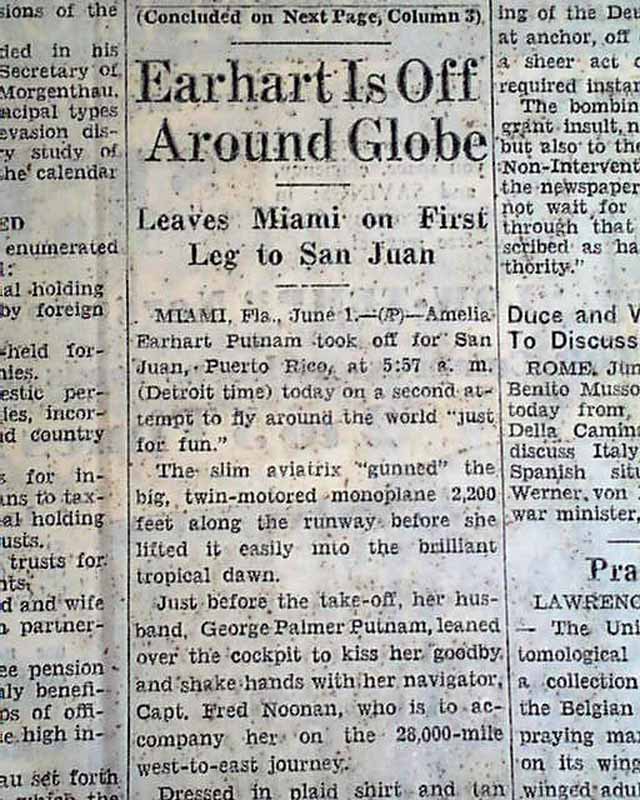 
THE DETROIT NEWS, Detroit, Michigan, June 1, 1937  This 40 page newspaper has one column headlines on the front page: "Earhart Is Off Around Globe" "Leaves Miami on First Leg to San Juan".

This tells of her flight from Miami to Puerto Rico. This was supposed to be the 1st leg in a attempt to fly around the World which never was accomplished after the first few legs. She would try again a few weeks later starting on the West Coast of the United States. This was when she disappeared for ever.

Other news of the day. Rag edition with little staining and spine wear, otherwise good.

wikipedia notes: Amelia Mary Earhart; (born July 24, 1897; missing July 2, 1937; declared legally dead January 5, 1939) was a noted American aviation pioneer and author. Earhart was the first woman to receive the Distinguished Flying Cross, awarded for becoming the first aviatrix to fly solo across the Atlantic Ocean. She set many other records, wrote best-selling books about her flying experiences and was instrumental in the formation of The Ninety-Nines, an organization for female pilots. Earhart joined the faculty of the world-famous Purdue University aviation department in 1935 as a visiting faculty member to counsel women on careers and help inspire others with her love for aviation. She was also a member of the National Woman's Party, and an early supporter of the Equal Rights Amendment.

During an attempt to make a circumnavigational flight of the globe in 1937 in a Purdue-funded Lockheed Model 10 Electra, Earhart disappeared over the central Pacific Ocean near Howland Island. Fascination with her life, career and disappearance continues to this day.