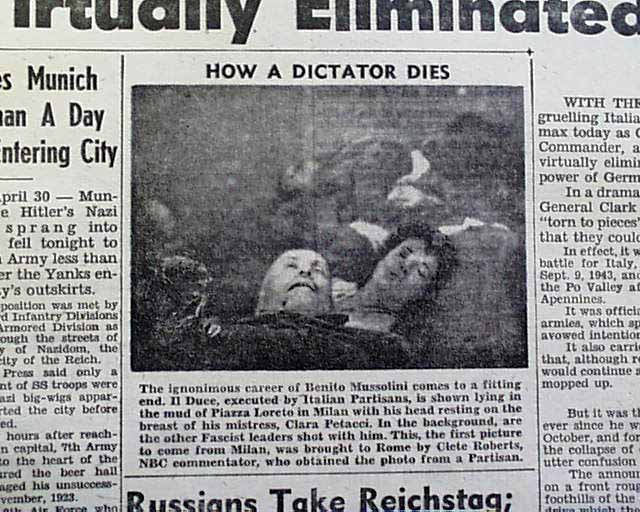 
THE STARS AND STRIPES, Mediterranean Edition, May 1, 1945

The front page includes the small but well-known photo entitled "How A Dictator Dies".  The caption includes, in part, "The ignominious career of Benito Mussolini comes to a fitting end.  IL Duce, executed by Italian Partisans, is shown lying in the mud of Piazza Loreto in Milan with his head resting on the breast of mistress, Clara Petacci."  The back page has considerable details as well (see images).

Other interesting items throughout. A very slight irregular left spine, otherwise in good condition. Complete in 8 pages.  Great to have this coverage in the Mediterranean edition of this military newspaper.

Note: As noted in the May 2, 1945 issue of this publication, the coverage of the execution was so sought after that a few vendors hid copies of The Stars and Stripes and sold them to customers they knew at black market prices. Prices of the Italian newspapers went from 2 lire to 15 lire.