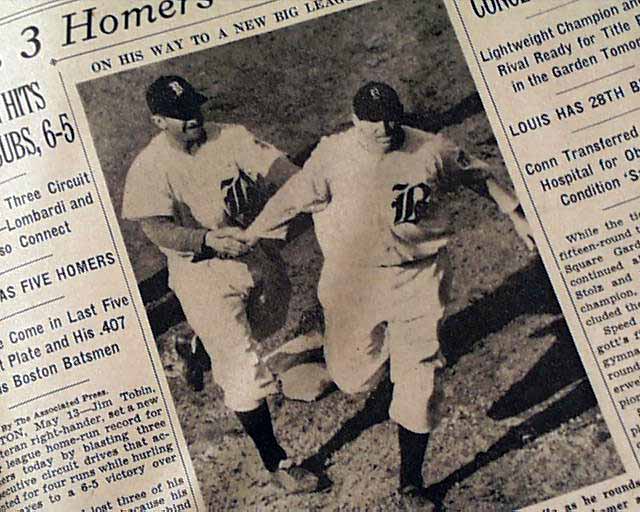 Tells of Boston Braves pitcher Jim Tobin becoming the only pitcher in modern MLB history to hit 3 home runs in one game. Nice to have in this famous NYC title.

wikipedia notes: James Anthony Tobin, known as Abba Dabba, (December 27, 1912, Oakland, California—May 19, 1969, Oakland) was a right-handed major league baseball pitcher with the Pittsburgh Pirates, Boston Bees/Braves and Detroit Tigers from 1937 to 1945. In 1944 with the Boston Braves he pitched two no-hitters (one a five-inning game).

Tobin was born in Oakland, California, where the hometown Oakland Oaks of the Pacific Coast League picked him up. They sent him to their Bisbee-Douglas farm team in the Arizona-Texas League. The New York Yankees signed him shortly thereafter. He played for them in Binghamton and Wheeling in 1933 and 1934. The Yankees sent him back to Oakland in 1935, where he compiled an 11-8 record before tearing the cartilage in his left knee. Appendicitis kept him off the Yankee roster the following year, and he went 16-8 for the Oaks.

Rather than return to the Oaks in 1937, he arranged a deal with the Pittsburgh Pirates, with whom he made his major league debut on April 30, 1937.

In 1940, Tobin joined the Boston Braves, where manager Casey Stengel made him a relief pitcher. On May 13, 1942, by then a starter, Tobin became the only pitcher in modern major-league history to hit three home runs in one game (Guy Hecker hit three homers in a game in the nineteenth century).

Still with the Braves in 1944, Tobin began throwing a knuckleball, and that season he his two no-hitters. The first was April 27, 1944, when he beat the Brooklyn Dodgers 2-0. The second was a five-inning game on June 22, 1944, in which the Philadelphia Phillies fell 7-0 (officially, this game is no longer considered a true no-hitter, as it lasted fewer than nine innings).

In another interesting event in 1944, Tobin drew a walk against Cincinnati Reds pitcher Clyde Shoun in the third inning of what would otherwise have been a perfect game for Shoun (who settled instead for a no-hitter).

Tobin was with the Tigers in 1945, when they won the American League pennant, but he did not appear in the World Series. He played his final major league game on September 23, 1945.

He was back in the Pacific Coast League the following year, pitching for the Seattle Rainiers and the San Francisco Seals. He was released in 1947, but the Oaks re-signed him in August 1948. That year he pitched the last out against the Sacramento Solons in a game that clinched the pennant for the Oaks.