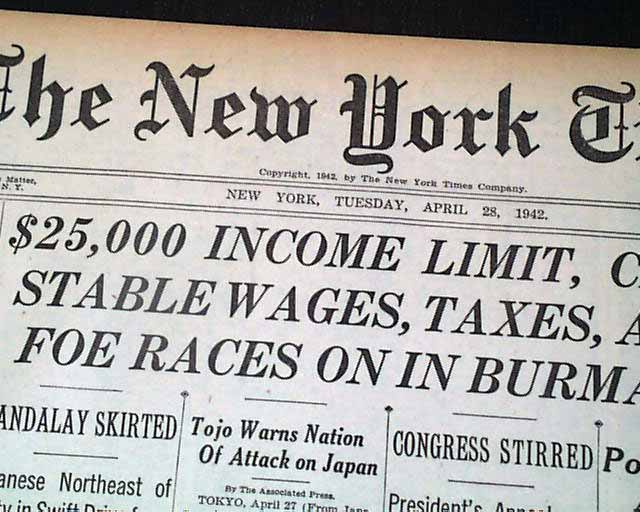 This 40 page newspaper has one column headlines on the front page: "OKLAHOMA STORM KILLS 100, HURTS 250", "Tornado Wrecks Armaments Town of Pryor--Two Pupils Are Dead in Minnesota".

Tells of the famous Pryor Creek Oklahoma that leveled the town.

wikipedia notes: A tornado swept along Pryor Creek's main street from the western edge of the business district to the eastern edge of the city, destroying nearly every building and causing extensive damage to the residential section. The twister was described by a witness as the "most awful looking thing anyone could imagine."

The storm killed 52 people, according to the U.S. Weather Bureau, but The Associated Press set the total at 60 two days after the storm. More than 400 were injured in the April 27, 1942, storm that caused damage estimated at $3 million.

Aftermath of the Tornado that hit Pryor Creek on April 27, 1942

The F4 tornado struck about 5 p.m., an hour and a half after one hit near Talala and mowed a path about five miles long, killing three and injuring 12. Talala, which was not hit, is about 30 miles northwest of Pryor Creek.

Both of Pryor Creek's hospitals were wrecked by the storm, the city's water supply was disrupted and there was no electrical or telephone service. Residential areas also suffered extensive damage.

Gov. Leon C. Phillips put the area under martial law, but because the Oklahoma National Guard had been activated for service during World War II, he sent state troopers to rescue victims, maintain order and prevent looting.

The troopers were assisted by soldiers stationed at the Oklahoma Ordnance Works south of the city and by employees of duPont Co. that was to operate the gun powder plant at the OOW. Ambulances were on the scene from Tulsa, Muskogee, Vinita, Claremore, Wagoner, and Siloam Springs, Arkansas.

Water was trucked in from Vinita and from the Oklahoma Ordnance Works. Tulsa doctors interrupted their weekly meeting, and a team of 20 went to Pryor to care for victims. Others went to the Tulsa hospitals to treat any victims sent there.

A shuttle train that usually transported workers between Muskogee and the Ordnance Works site was pressed into service to transport injured victims to Vinita for treatment.

The Pryor tornado ranks as the fifth deadliest in Oklahoma history behind tornadoes at Woodward in 1947, Snyder in 1905, Peggs in 1920 and Antlers in 1945. The May 3, 1999, tornado at Midwest City caused more damage but fewer deaths.

Talala residents said they did not see the typical funnel of a tornado in the storm. They said what looked like a series of streaks reaching from the clouds to the ground leveled everything in their paths.

But there was a definite funnel at Pryor Creek.