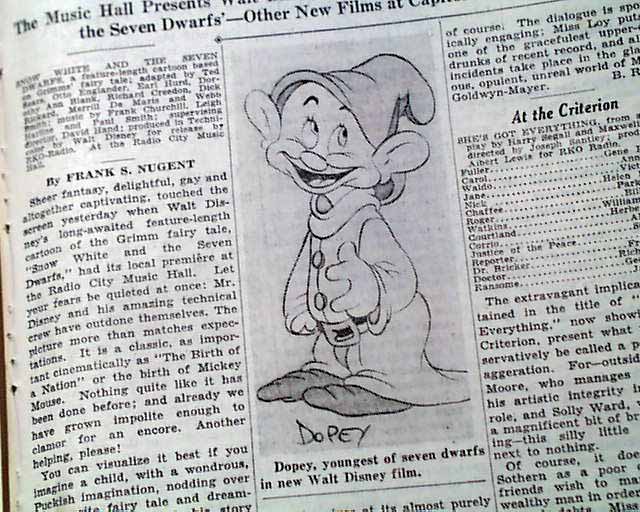 "Sheer fantasy, delightful, gay and altogether captivating, touched the screen yesterday when Walt Disney's long-awaited feature-length cartoon of the Grimm fairy tale, "Show White and the Seven Dwarfs" had its local premiere at the Radio City Music Hall. Let your fears be quieted at once: Mr. Disney and his amazing technical crew have outdone themselves..." with more (photos show portions).

Included with the review is a photo from the film, showing Dopey.

Although its world premiere was on Dec. 21, 1937, its general release was on February 4, 1938, several weeks after this review. It was the highest grossing film in movie history until unseated by "Gone With The Wind". It was the first full length animated feature to be produced by Walt Disney, and the first American animated feature film in movie history.

This is the complete 40 page issue with light browning, otherwise in good condition.

wikipedia notes: Snow White and the Seven Dwarfs is a 1937 American film based on the eponymous German fairy tale by the Brothers Grimm. It was the first full length animated feature to be produced by Walt Disney, and the first American animated feature film in movie history.

Snow White was one of only two animated films to rank in the American Film Institute's list of the 100 greatest American films of all time in 1997 (the other being Disney's Fantasia), ranking number 49. It achieved a higher ranking (#34) in the list's 2007 update, this time being the only traditionally animated film on the list. The following year AFI would name the film as the the greatest animated film of all time

In 1989, Snow White and the Seven Dwarfs was added to the United States National Film Registry as being deemed "culturally, historically, or aesthetically significant."