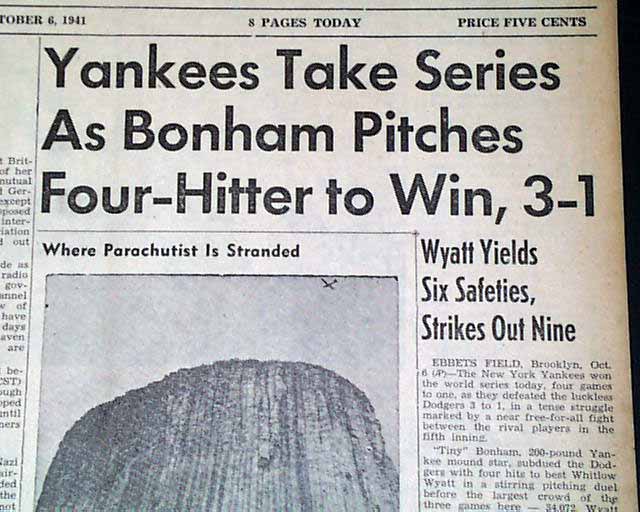 This 8 page newspaper has a three column headline on the front page: "Yankees Take Series As Bonham Pitches Four-Hitter to Win, 3-1" and a 1 column subhead: "Wyatt Yields Six Safeties, Strikes Out Nine".

Has a summary of the game, plus an inning by inning account & the box score.

Other news of the day throughout. Tiny binding holes along the spine, light browning, otherwise in good condition.

The name "Subway Series" arose for a World Series played between two New York City teams. The series was punctuated by the Dodgers' Mickey Owen's dropped third strike of a sharply breaking curveball (a suspected spitball) pitched by Hugh Casey in the 9th inning of Game 4. The play led to a Yankees rally and brought them one win away from another championship.

This was the first Subway Series between the Brooklyn Dodgers and New York Yankees, who had already faced the crosstown New York Giants five times, and the Series was now 1-0 in favor of the Bronx Bombers. These two teams would meet a total of seven (7) times from 1941-1956 - the Dodgers' only victory coming in 1955.