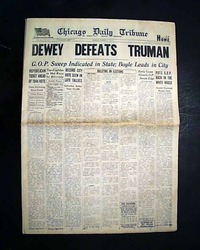 See the photos for what is arguably the most recognizable headline of the 20th century: "DEWEY DEFEATS TRUMAN". Even those not remotely knowledgeable about historic newspapers are familiar with this headline as it appeared in countless history books, historical reviews o
... See More 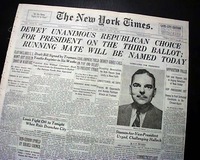 The front page has a nice banner healdine: "DEWEY UNANIMOUS REPUBLICAN CHOICE FOR PRESIDENT ON THE THIRD BALLOT; RUNNING MATE WILL BE NAMED TODAY" with many subheads and photo of Dewey. Much more inside. Always nice to have notab... See More