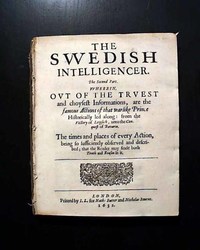 A quite rare newsbook by the famed publishing team of Nathaniel Butter and Nicholas Bourne who are credited with being the founders of the English language periodical format, taken from like-publishers in Germany & Amsterdam. Curiously some of the f... See More

Item #649518
Newspapers (Newsbooks) from the 1500's are extremely hard to find, and when we offer them, they sell almost immediately. If you would like to be placed on a want list to be contacted when such an item comes into our possession (no obligation to buy), please let us know by e-mail at guy@rarenewspapers.com. Although this listing shows a price of $5,000, actual prices vary by date, title, and con... See More 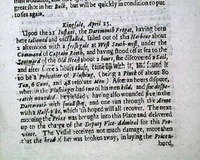 Here is an uncommon title in newsbook format (the forerunner of newspapers), which has news from various cities in England and Europe. This title pre-dates the London Gazette, the world's oldest continually published English language newspaper (by exactly one month).
There is a report of a naval battle between t... See More 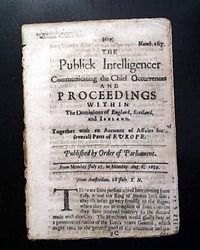 Newsbook from the mid-17th century...


"THE PUBLICK INTELLIGENCER, Communicating the Chief Occurrences & Proceedings Within the Dominions of England, Scotland, and Ireland: Together with an Account of Affaires from Severall Parts of Europe.", London, August 1, 1659

Certainly one of the less common newsbooks from the 17th century. Newsbooks were the predecessors of today's news... See More