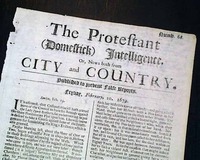 
THE PROTESTANT (DOMESTICK) INTELLIGENCE, OR NEWS BOTH FROM CITY AND COUNTRY, London, England, February 20, 1679 (1680 by today's calendar)

Here is a rare opportunity to purchase a newspaper by Benjamin Harris. Harris was the first newspaper publisher in the colonies, having published "Public Occurrences Both Foreign & Domestick" in Boston in 1... See More 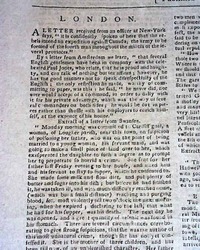 On the front page under "London" is part of a letter from Amsterdam stating: "...that several English gentlemen have been in company with the celebrated Paul Jones, who relate that he is proud & haughty, and can talk nothing of sea affairs; however, he has the good manners not t... See More