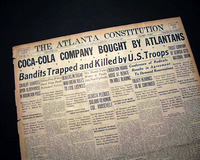 
THE ATLANTA CONSTITUTION, August 22, 1919  This issue features as a banner headline one of the more historic moments in the history of the Coca-Cola Company, when Asa Chandler, the man who bought the original formula from founder John Pemberton and propelled the company to national prominence by the 1890's, sold the company to Ernest Woodruff and an investor group for $25 million. The bus... See More 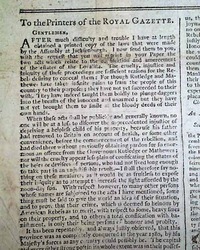 A rare issue of a short-lived "Royal" newspaper from Charleston...

Certainly a most rare title, this being just the second issue we have offered in our 40 years in the hobby. This title is  the continuation of the "South Carolina & American General  Gazette" which began in 1764, but when the British c... See More