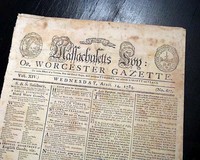 The decorative masthead of this newspaper was engraved by none other than Paul Revere. Beyond his famous ride to warn that the "British are coming!", he was an accomplished engraver and silversmith. This is one of just a few news... See More 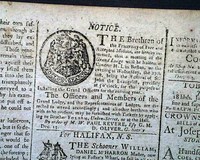 
COLUMBIAN CENTINEL, Boston, Dec. 23, 1797  The top of page 3 has a "Notice" concerning a meeting of the Masons, noted at the bottom: "By order of M. W. Paul Revere, Esq. G.M." who was the Grand Master of the Masons at that time (see).
Complete in four pages, nice condition. 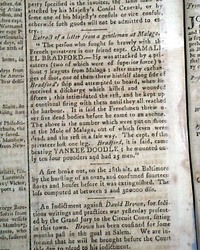 Page 2 has a report of a naval battle noting in part: "...the capt. of the privateer lost one leg. Bradford, it is said, came beating YANKEE DOODLE; he mounted only ten four pounders and had 25 men."
But the most notable content is the full column on page 4 which has: "Plan of a Ligh... See More 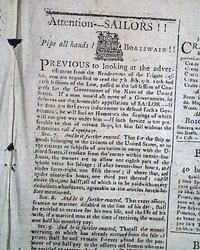 Recruiting for the frigate Boston, and more...


COLUMBIAN CENTINEL, Boston, June 22, 1799  Half a column on page 3 is taken up with a detailed notice headed: "ATTENTION---SAILORS!!" "Pipe all Hands!  Boatswain!!" which concerns the USS Boston (3rd rendition) and its involvement in the Quasi War and First Barbary War, noting the spoils to accrue to the sailors in naval action (see). Plus the back page has a nice rec... See More