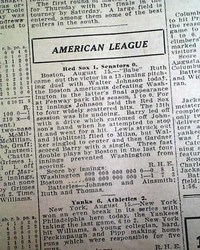 * Babe Ruth vs. Walter Johnson pitching duel
* Early coverage for Ruth, before he was a Yankee

The sports section (page 10) has a brief yet very historic report under "American League" "Red Sox 1, Senators 0" with the text beginning: "'Babe' Ruth came out the victor in a 13 inning pithcing duel...". (see) This w... See More 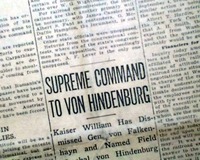