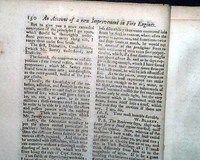 Taking nearly two pages is a letter: "Hardheartedness to the Poor Considered" which was written by Ben Franklin, although signed: "Medius" (see https://founders.archives.gov/docum... See More 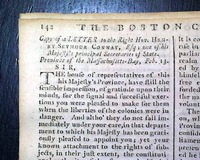 
THE BOSTON CHRONICLE, Massachusetts, April 4, 1768  Inside has most of a page taken up with a letter from the Speaker of the Mass. Assembly to one of the King's Secretaries of State, which includes: "...it seems to be conclusive that as those acts were made with the sole & express purpose of raising a revenue out of America, the subjects here are in those instances unfortunately ... See More