Home > Back to Search Results > Abolishment of slavery, and the backlash from Jamaica...
Click image to enlarge 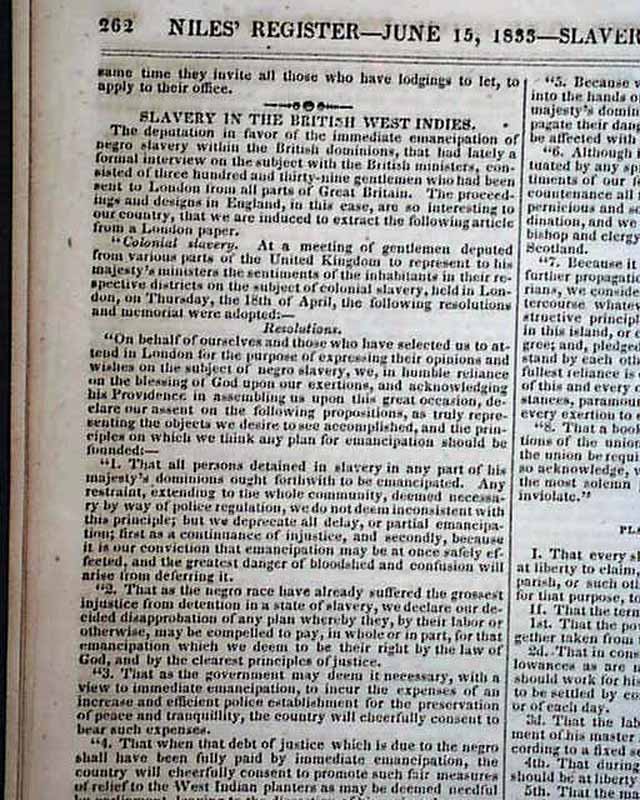 Abolishment of slavery, and the backlash from Jamaica...

* Slavery and emancipation in Jamaica

The best item in this issue is a rather incredible declaration from Jamaica stating that: "we...declare that we are resolved...not to suffer any baptist or other sectarian preacher or teacher...to preach or to teach in any house...Because...the baptists...have instilled into the minds of ours hitherto contented and happy slave population opinions that they are and have been an oppressed and injured people...they have falsely propagated among our slaves an opinion that the king...had made them free, which so bewildered their minds as utterly to destroy every tie of affection for their masters..." and much more.
The Act would have its third reading in the House of Commons on July 26,1833. It would receive the Royal Assent a month later, and come into force the following year, on Aug. 1, 1834.
This is considered the Slavery Abolition Act of 1833.
"The President's Visit" was between Andrew Jackson and Black Hawk with other Indian leaders.

Additionally there is over half a page headed: "Slavery in the British West Indies" which reports on the: "...deputation in favor off the immediate emancipation of negro slavery within the British dominions..." which includes the full text on the 5 "Resolutions", signed in type by: Samuel Gurney as the chairman. The same page has the: "Plan of Negro Emancipation" detailing the nine points, and datelined at London, May 11.