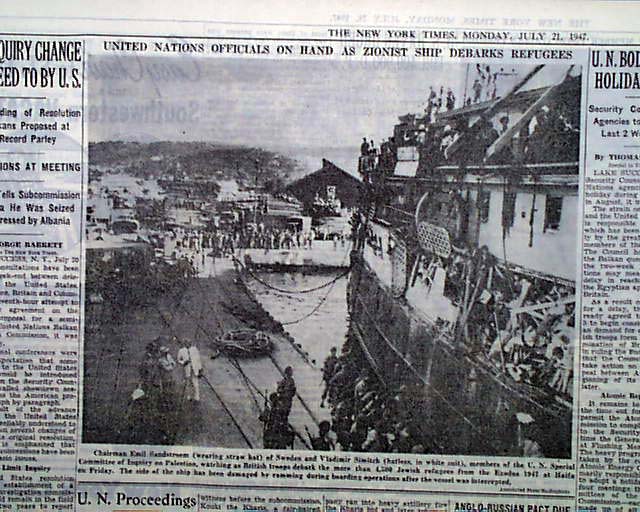 The front page has: "JEWS SHIPPED BACK TO PORT IN FRANCE, PALESTINE REPORTS," with subhead, "Soldier Killed, Policeman Shot, Others Hurt In Retaliation for Actions on Refugees." The article continues on page 5 under the heading, "PALESTINE REPORTS JEWS SHIPPED BACK." Additional related coverage is also found on page 5, including a large photo of the vessel. The articles provide details regarding the seizure of "EXODUS 1947" which was a ship carrying many Jewish refugees from France.
Of additional significance is the page 21 article headed: "HALL OF FAME DAY SETS HONORS FOR 15," with subhead: "New Plaques Will Be Placed in Baseball Shrine Today". Note: Inductees included Frankie Frisch, Carl Hubbell, Mickey Cochrane and Lefty Grove. Frisch was the 1st switch hitter inducted into the Hall of Fame.
Thirty-six pages, rag edition (for library/institutional use), great condition.