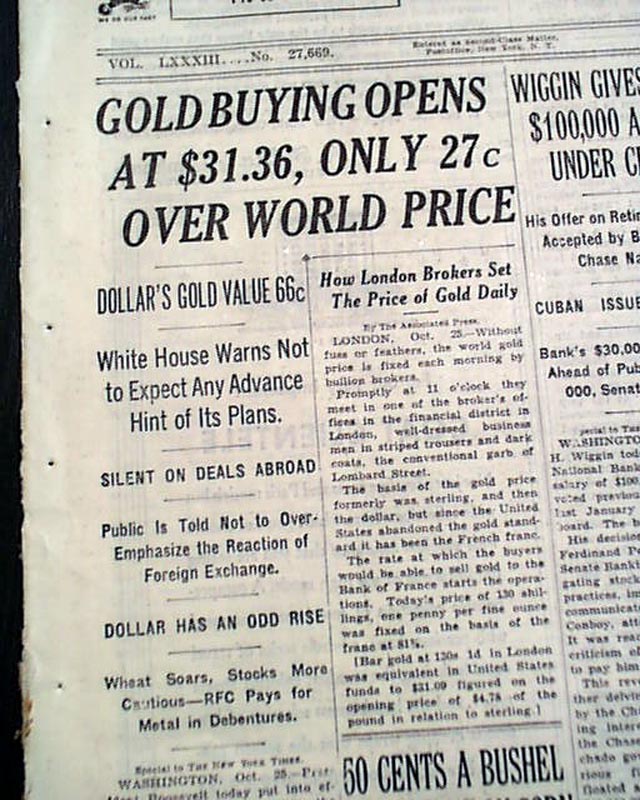 The top of the front page has a two column headline: "GOLD BUYING OPENS AT $31.36, ONLY 27c OVER WORLD PRICE" with subheads. (see images)
Other news, sports and advertisements of the day. Complete in 42 pages, rag edition, some wear at the bottom, right corner, otherwise in great condition.

wikipedia notes: In 1933, Roosevelt became President and appointed Morgenthau governor of the Federal Farm Board. Morgenthau was nonetheless involved in monetary decisions. Roosevelt adopted the idea of raising the price of gold to drive down the value of the dollar, thereby raising the price of all goods — especially farm goods. The idea came from Professor George Warren of Cornell University, and despite the opposition to the idea, Morgenthau was willing to help him. When Roosevelt told Morgenthau he was thinking of raising the price of gold by 21 cents, his entourage asked him why. "It's a lucky number," Roosevelt said. "Because it's three times seven." As Morgenthau later wrote, "If anybody knew how we really set the gold price through a combination of lucky numbers, etc., I think they would be frightened."