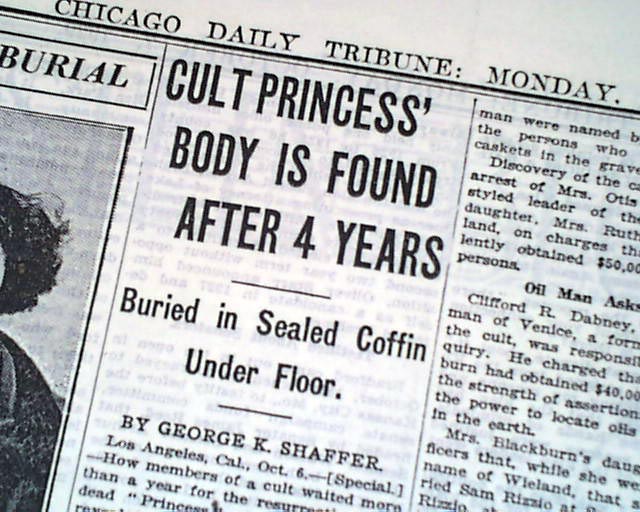 The top of page 5 has a one column heading: "CULT PRINCESS' BODY IS FOUND AFTER 4 YEARS" with subhead. Also a two column photo with heading. (see)
Complete with 46 pages, rag edition in great condition.

wikipedia notes: The Blackburn Cult, officially the Divine Order of the Royal Arms of the Great Eleven, or the Great Eleven Club, was a new religious movement started in 1922 by American woman May Otis Blackburn. She started the group on Bunker Hill in Downtown Los Angeles, California, and later formed a retreat in the Southern California Simi Valley.
Blackburn was said to have received revelations directly from angels, and, along with her daughter Ruth Wieland Rizzio, believed that she was charged by the archangel Gabriel to write books revealing the mysteries of Heaven and Earth, and life and death.
Newspaper articles from the period reported strange rituals including the sacrifice of animals, sex scandals and attempts to resurrect a dead 16-year-old girl. Police found the corpse of young woman Willa Rhoads under the floor at the Rhoadses' residence, wrapped in spices and salt, and surrounded by the bodies of seven dead dogs. Mr. and Mrs. Rhoads later confessed to the police that they had placed their daughter in the tomb fourteen months earlier at the suggestion of May Otis Blackburn. The cult was also accused of killing a member in an oven, poisoning another during a "whirling dervish" ceremony, and making several other members disappear.