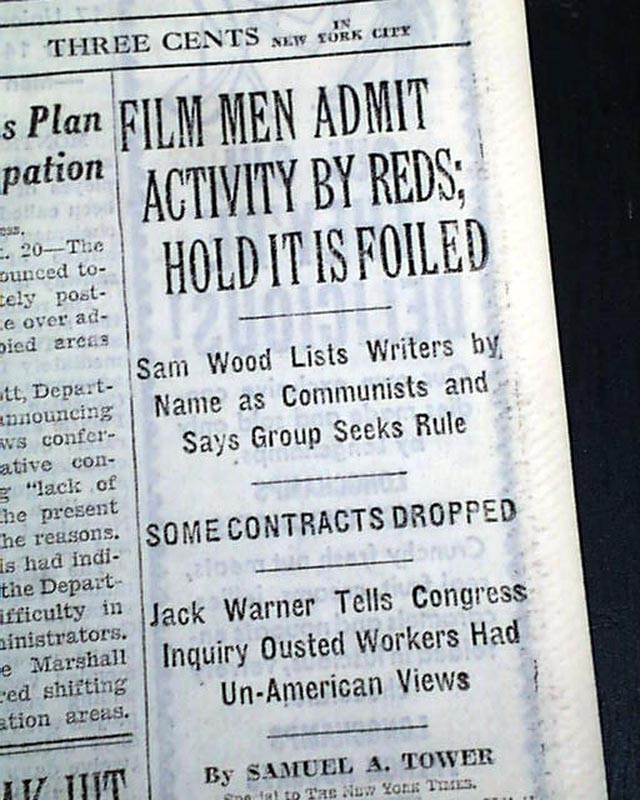 The top of the front page has a one column heading: "FILM MEN ADMIT ACTIVITY BY REDS; HOLD IT IS FOILED" with subheads (see) A few related photos are on page 3.
Complete with 48 pages, rag edition in nice condition.

wikipedia notes: In October 1947, a number of persons working in the Hollywood film industry were summoned to appear before the House Committee on Un-American Activities, which had declared its intention to investigate whether Communist agents or sympathizers had been surreptitiously planting propaganda in U.S. films.[9] This group of American movie professionals—primarily screenwriters, but actors, directors, producers, and others as well—were either known or alleged to have been members of the American Communist Party. The hearings began with several Hollywood professionals, including Walt Disney and Ronald Reagan, president of the Screen Actors Guild, testifying that the threat of Communists in the film industry was a serious one. Actor Adolphe Menjou declared, "I am a witch hunter if the witches are Communists. I am a Red-baiter. I would like to see them all back in Russia." In contrast, several leading Hollywood figures, including director John Huston and actors Humphrey Bogart, Lauren Bacall, and Danny Kaye, organized the Committee for the First Amendment to protest the government targeting of their industry.