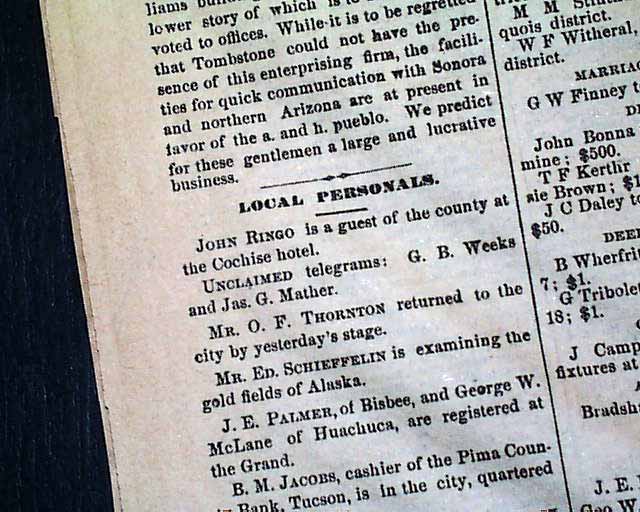 * Best old West title to be had
* Johnny Ringo mention

Few could argue for a more recognizable title from the Old West, nor could any town be more linked to the romance of the West than this one. Tombstone is steeped in Western lore, and the several movies done concerning the gunfight at the O.K. Corral have kept this town in popular culture. This issue was printed less than 3 months after the famous gunfight at the O.K. Corral. As an added tie to the Old West, the back page ha a very brief--yet rare--mention of Johnny Ringo, an associate of the Clanton Gang, reporting that: "John Ringo is a guest of the county at the Cochise Hotel." (see). Note also the very nice: "$2500 Reward!" ad the arrest of robbers of a stage coach. There is also report of a "private hanging" in Georgia, and a "Notice" from the mayor concerning a permit for the carrying of fire arms (see).
Complete in 4 pages, archivally rejoined at the spine, a few other archival mends at margins, generally in nice condition and one of the nicer issues of this famous title we have offered.