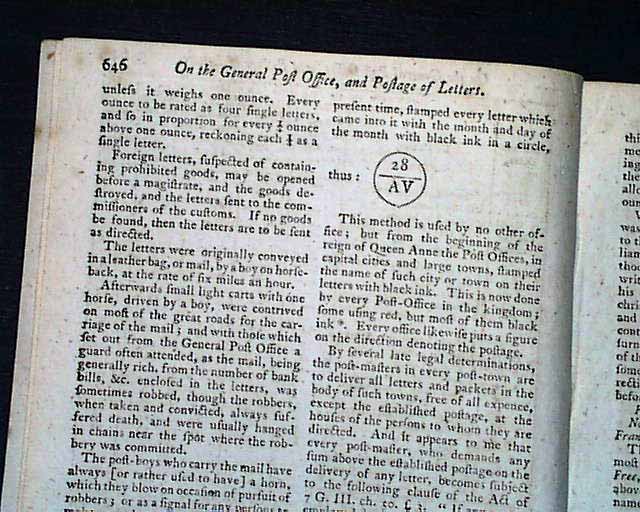 This periodical was the first ever to use the word "magazine" in its title.
There is a nice article: "On the General Post Office & Postage of Letters" with a chart of the various rates and small engravings of cancellations & free postage, franking notations (see).
There is a nice letter concerning early hot air balloon flight, which includes: "...A new set of words is wanting to express the wonderful discovery of Montgolfier. It is degrading to the aerial passengers to describe their gliding in the air by the terms of navigation; the flight of birds comes nearest to it..." with more (see).
There is 3 page continued article: "Captain Cook's last Voyage to the Pacific Ocean" (see photos for portions) which continues in a later issue.
Near the back is: "American News" which includes: "The rage of ballooning has reached the American coast & on the 17th of July one of an enormous size was launched at Philadelphia which rose majestically, but when at a certain height it took fire & was consumed to atoms..." with a bit more (see). This event is thought to be a myth.
Lacking the large foldout plate titled: "View of the New River, as Conveyed Through the Frame at Bush Hill".
Complete measuring 5 1/4 by 8 1/4 inches, very nice condition.