Home > Back to Search Results > Rare issue of the Oxford Gazette... Death toll from the Great Plague...
Click image to enlarge 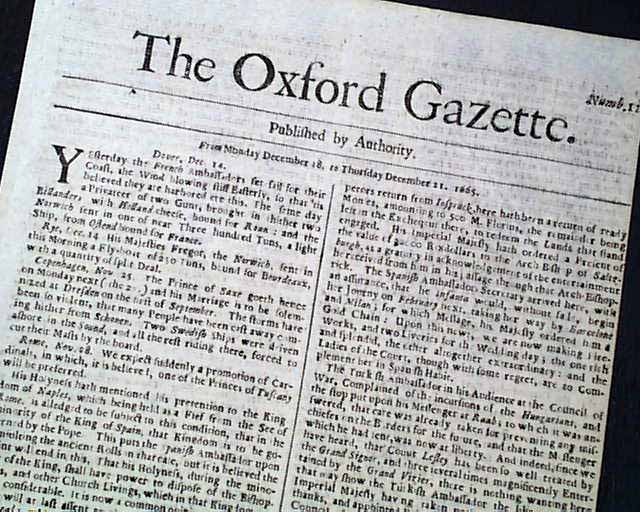 Rare issue of the Oxford Gazette... Death toll from the Great Plague...

* Earliest & Rarest of newspapers to be had
* The black plague deaths

This is an extremely famous--and rare--title, being the predecessor of the famous "London Gazette", the oldest continually published English language newspaper in the world. This is the #11 issue.
Because of the Plague at this time, the Royal Court had removed itself from London to Oxford when this newspaper began, so issues #1 thru #23 were published simultaneously in Oxford & London and when the contagion had subsided & the Court returned to London this newspaper went with it and renamed itself "The London Gazette" with issue #24, and the rest is history.
The content is entirely taken up with reports from various parts of Europe, most with a military theme. The front page has a bit from Middlebrough concerning the Great Plague: " 'Tis more than suspected our fleet had the Sickness among them because so very many have died here suddenly, & the greatest part of those souldiers which were last at sea, or such as they had most familiarity with...". Also, the bottom of the back page has the weekly death toll noting: "The accounts of the weekly bill of mortality runs thus. Total 525. Plague 281. Increase 83." (see)
Complete as a single sheet issue, 7 by 11 1/4 inches, a few very tiny worm holes at the bottom, in very nice, clean condition.
Certainly a very scarce newspaper and a cornerstone issue for any early newspaper collection, being an early issue of the world's oldest continually published newspaper.