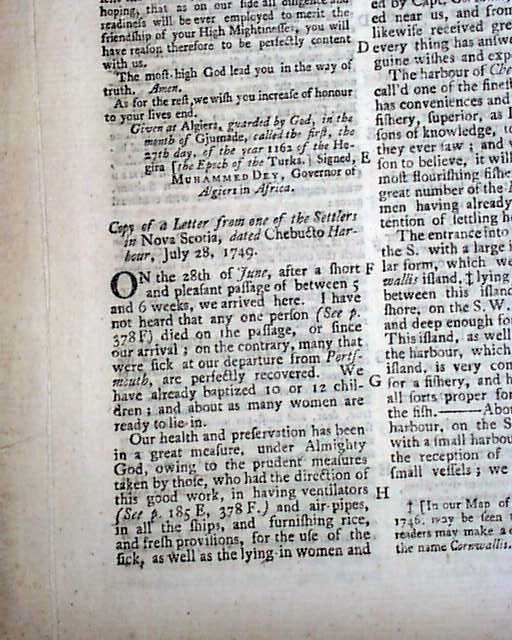 Item # 688535
THE GENTLEMAN'S MAGAZINE, London, September, 1749  Over half a pg. has a: "Copy of a Letter from one of the Settlers in Nova Scotia dated Chebucto Harbour, July 28, 1749". Over half a pg. has: "Extracts of Some Letters from Carolina" datelined "Charles-Town" (Charleston) with news from that colony. There is also: "The Humble Address & Representation of the Council & Assembly to the Island of Jamaica".
Included is a very nice foldout plate titled: "The Shield of Achilles" which is very detailed & ornate. Lacking the other plate called for.
Near the back is the "Historical Chronicle" which has the latest news events of the day and includes a brief item: "....According to the plan laid out for the town of Halifax, the capital of Nova Scotia, that city is at first to consist of 2000 houses, disposed into 50 streets of different magnitudes. In the middle of the town is to be a spacious square, with an equestrian statue of his majesty."
Other interesting items include: "Escape & Adventure of Three Nuns" "Schemes for Attacking the Spanish Settlements" "Curves Described by the Planets" "Arrival of the Settlers at Nova Scotia" "All Fishes not Mute, nor Deaf" and more.
Complete in 48 pages, 5 1/2 by 8 3/4 in. with wide untrimmed margins, full title/contents page, nice condition.