Home > Back to Search Results > Harvard's 'special' commencement on the end of the Civil War... Slavery abolished in Georgia...
Click image to enlarge 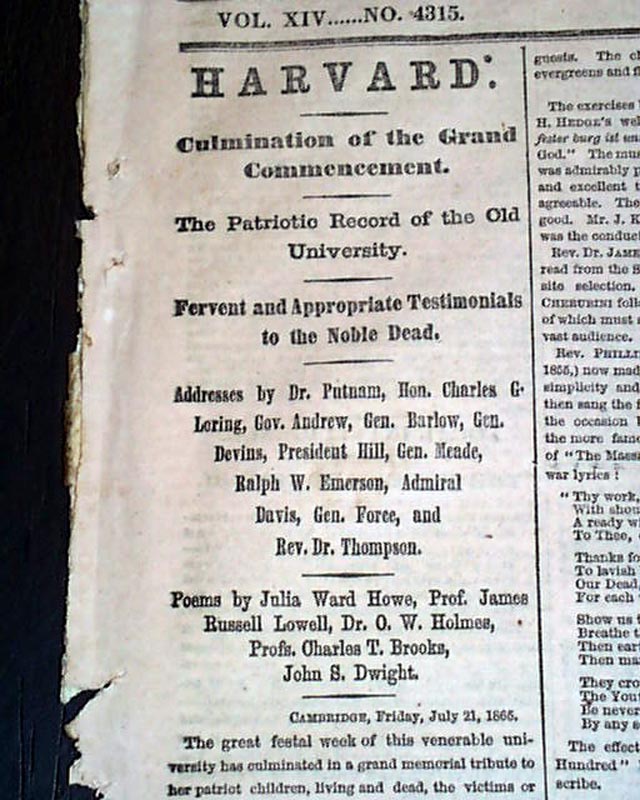 Harvard's 'special' commencement on the end of the Civil War... Slavery abolished in Georgia...

The entire front page features the coverage of "HARVARD" "Culmination of the Grand Commencement" which concludes on the back page.

Although the Civil War had not formally concluded, Harvard's Commencement Week, celebrated the end of the Civil War and honored the Harvard alumni who had served and died in it.
A "Commemoration Ode" delivered as part of the ceremonies by James Russell Lowell and printed on the front page, was widely reprinted. Among the notables who spoke was Ralph Waldo Emerson.
Page two reports: "Restoration in Georgia - A Proclamation by Gov. Johnson - Important Speech at Macon - Slavery Utterly Extinguished".  Page 5 has a nice baseball game report including the box score.
Eight pages, irregular at the blank spine, a few minor margin tears, nice condition.