Home > Back to Search Results > Virginia mention in 1666, and mention of the Great Plague...
Click image to enlarge 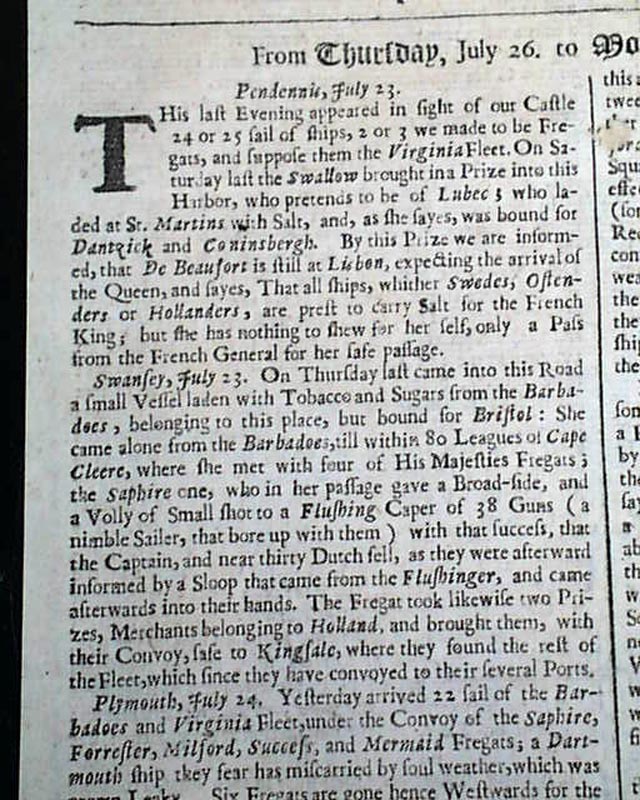 Virginia mention in 1666, and mention of the Great Plague...


THE LONDON GAZETTE, England, July 30, 1666  An extremely early issue of the world's oldest continually published English language newspaper, having begun just one year prior in 1665 and is still publishing today. This is issue #74.
This issue has some desirable content. The front page has two mentions of the "New World", Virginia more specifically, in the very first paragraph: "...appeared in sight of our Castle 24 or 25 sail of ships, 2 or 3 we made to be Fregats & suppose them the Virginia fleet...".
Further on is mention of Barbados (twice), and further on still is a report beginning: "Yesterday arrived 22 sail of the Barbadoes and Virginia fleet...". Keep in mind this is just 46 years after the Pilgrims landed in America.
Also of significance is the front page mention of the Great Plague. The year 1666 was noteworthy for the Great Plague as well as the Great London Fire which destroyed much of the city in September, just a few months after this newspaper was printed.
The front page has a death report from Norwich noting: "The Account of our bill this last week is thus. Of all Diseases, 147. Plague, 130. And at the Pesthouse, 7." Period newspapers with mention of the Great Plague are desired and increasingly difficult to find.
Complete as a single sheet newspaper, 7 by 11 1/4 inches, loss at the bottom right corner just touches a few letters on the front page & nothing on the back page, otherwise in very nice condition.