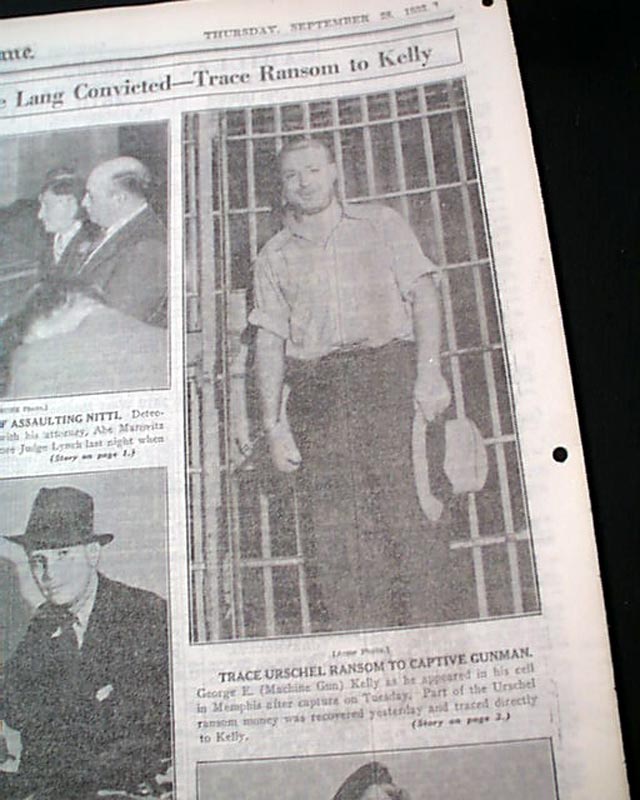 The front page has a one column heading: "CHICAGO POLICE HUNT ESCAPED FELONS IN CITY" with subhead. Lengthy coverage continues on page 10. Two related photos are on the back page.
The top of the page 3 has a one column heading: "KELLY ADMITS HELPING KIDNAP CHARLES URSCHEL" with subhead and related photo. (see) Three related photos are on the back page.
When it comes to gangsters, organized crime, and the nefarious activities born out of the Prohibition and Great Depression eras, no city is more in the forefront of our minds than Chicago - and what better newspaper can be found than the Chicago Tribune, self-proclaimed to be "The World's Greatest Newspaper.
Other news, sports and advertisements of the day. Complete in 36 pages, this is the rare rag edition that was produced on very high quality newsprint, with a high percentage of cotton & linen content, allowing the issues to remain very white & sturdy into the present. Given the subscription cost, libraries & institutions rather than individuals were the primary subscribers of these high-quality editions. Nice condition. A few small binding holes along the spine.