Home > Back to Search Results > The situation with America... Report from Charleston...
Click image to enlarge 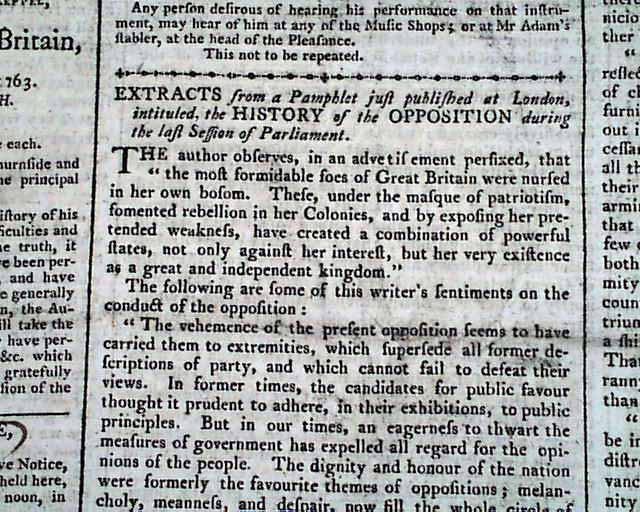 The situation with America... Report from Charleston...

A brief item on pg. 2 notes: "...an express was received from South Carolina that General Prevost had made himself master of Charlestown [Charleston] the 11th ult, which he had carried by assault." See images for more details.
Over half of the front page is taken up with: "Extracts from a Pamphlet...the History of the Opposition During the Last Session of Parliament" which includes much concerning the Revolutionary War, a few bits including: "...that the most formidable foes of Great Britain were nursed in her own bosom. These, under the masque of patriotism, fomented rebellion her Colonies & by exposing her pretended weakness, have created a combination of powerful states not only against her interest, but her very existence as a great & independent kingdom..." and further on: "...that when the American Congress avowed independence, & especially when they leagued with France, the grounds of the original question were entirely changed...he resistance of America must have ceased..." plus much more.
Four pages, folio size, some notations in ads & margins, very nice condition.