Home > Back to Search Results > Sam Houston is President of Texas...
Click image to enlarge 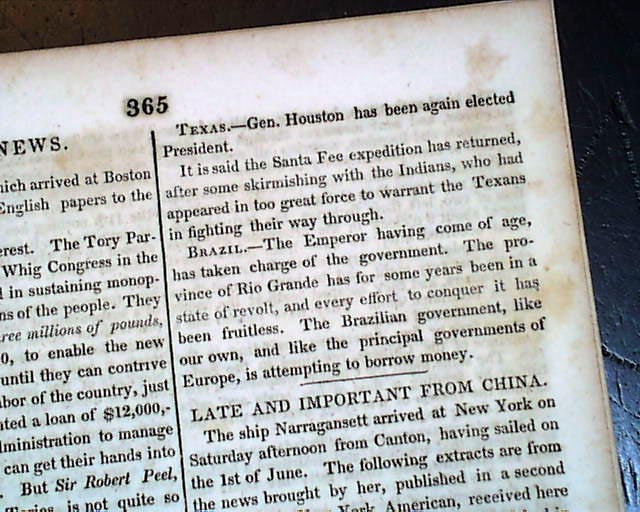 Sam Houston is President of Texas...


KENDALL'S EXPOSITOR, Washington, D.C., Nov. 4, 1841  The top of an inside page has a very brief yet notable report: "Texas--Gen. Houston has been again elected President."
This is followed by another item: "It is said the Santa Fe expedition has returned after some skirmishing with the Indians who had appeared in too great force to warrant the Teams in fighting their way through."
This was an uncommon title which lasted but 4 years. The prospectus (not here) notes it was a semi-weekly devoted to "...the security of the right of suffrage by additional laws to punish bribery & fraud...an exposure of abuses & corruptions in government..." and more.
Amos Kendall was Postmaster General under Andrew Jackson, later publishing this small, bi-weekly newspaper from 1841-1844 He was very pro-democrat and anti-Whig.
Complete in 16 pages, 5 3/4 by 8 3/4 inches, nice condition.