Home > Back to Search Results > Terrific reporting on the Battle of Bull Run...
Click image to enlarge 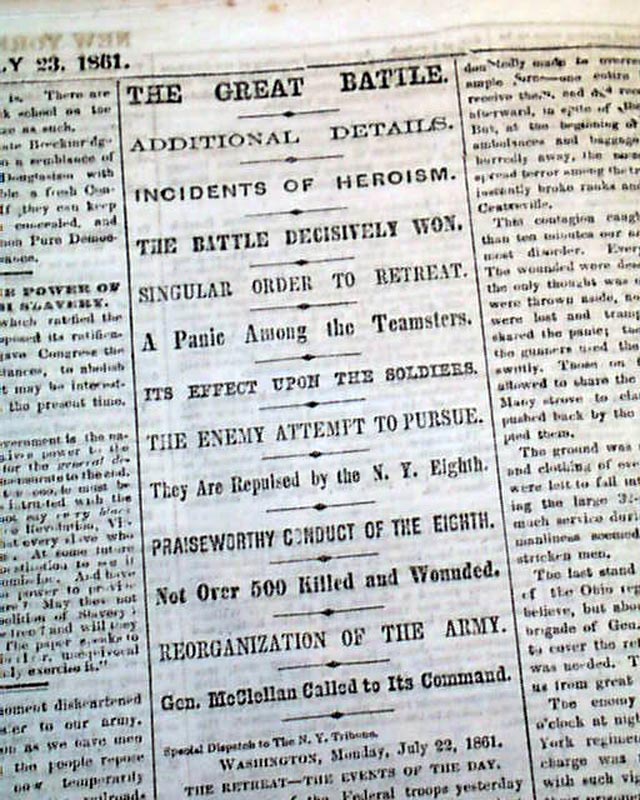 Terrific reporting on the Battle of Bull Run...

Page 4 has some nice column heads on the battle of Bull Run, the first major battle of the Civil War, including: "THE GREAT BATTLE" "Incidents of Heroism" "The Battle Decisively Won" "The Enemy Attempt to Pursue" "Praiseworthy Conduct of the Eight" and more.
The text of the battle takes 2 columns on pg. 4 and almost the entirety of pg. 5, with some subheads including: "Secession Account of the Battle" " Rebel Account of Bull's Run Fight" "Extravagant Tales" "Another Account of the Retreat" and more. Plus pg. 6 has heads: "The War For The Union" "National Disaster At Bull's Run" "The Conflict & the First Success" with the text taking the entire page. And more reporting on page 7 as well!
A wealth of great reading on this famous battle.
Eight pages, nice condition.